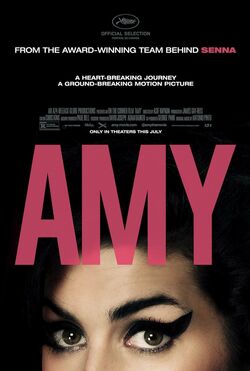 Amy (2015) is a British documentary film depicting the life and tragic death of singer-songwriter Amy Winehouse. It is directed by Asif Kapadia, produced by Universal Music, Playmaker Films & Krishwerkz Entertainment and distributed by the Altitude Film Distribution.

The film received a theatrical release on July 3, 2015 in the United Kingdom and United States and was then released worldwide on July 10. The film depicts Winehouse's life largely from the standpoint of her struggle with substance abuse problems both before and after her career began to blossom, and which eventually caused her premature death.

The story of Amy Winehouse in her own words, featuring unseen archival footage and unheard tracks.[1]