watch 01:56
The Loop (Movies)
Do you like this video?
Play Sound
An American Werewolf in London 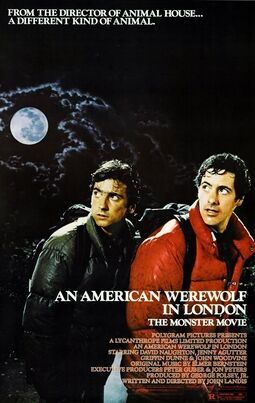 The Guber-Peters Company
Distributed By

An American Werewolf in London is a 1981 horror comedy film directed by John Landis. The film stars David Naughton, Jenny Agutter, Griffin Dunne and John Woodvine. Shooting took place mostly in London but also in Surrey and Wales. It was released in the United States August 21, 1981, and grossed $30.56 million at the box office. Critics generally gave the film favourable reviews. The film won the 1981 Saturn Award for Best Horror Film and an Academy Award for Outstanding Achievement in Makeup. The film was one of three high-profile wolf-themed horror films released in 1981, alongside The Howling and Wolfen. Over the years, the film has accumulated a cult following and is a cult classic.

The film was followed by a 1997 sequel, An American Werewolf in Paris, which featured a completely different cast and none of the original crew, and is distributed by Disney's Hollywood Pictures. A Hindi film, Junoon, was also inspired by this movie.

Empire magazine named An American Werewolf in London as the 107th greatest film of all time in September 2008. August 15, 2013, the Universal Orlando Resort announced it would use the film as the basis for its seventh maze during that year's annual Halloween Horror Nights event. The maze was so popular, it became part of the 2014 Halloween Horror Nights event at Universal Studios Hollywood.

An upcoming remake titled the same name, An American Werewolf in London, is currently in the works, with Max Landis as writer and director of the film.

Two American college students, David Kessler and Jack Goodman, are backpacking across the Yorkshire moors. As darkness falls, they decide to stop for the night at a pub called "The Slaughtered Lamb". Jack notices a five-pointed star on the wall. When he asks about it, the pub becomes very quiet and the pubgoers start acting very strange and hostile. The pair decide to leave, but not before the others offer them pieces of advice such as "Beware the moon, lads" and "Keep to the road." Whilst conversing with each other and wondering what they meant, they wander off the road, onto the moors.

Back at the pub, the owner gets very distressed and suggests that they go after the pair. As she says this, a sinister howling is heard. The rest of the pubgoers, having barricaded the door, decline. Back out on the moors, Jack and David have also heard the howls, and they seem to be steadily getting closer. They start back to the Slaughtered Lamb when they realize that they have left the road and are now lost on the moors. A full moon comes out from behind the clouds, and they remember the advice they were given earlier. The noises get steadily closer until the boys are stopped by a supernaturally large animal. The animal attacks both of them, and kills Jack. The animal is then shot and killed by the pubgoers, who have finally emerged. The beast changes into the dying body of a naked man. David survives the mauling and is taken to a hospital in London.

When David wakes up three weeks later, he does not remember what happened and is told of his friend's death. David is questioned by the arrogant Inspector Villiers and the bumbling, but more understanding Sergeant McManus and learns that he and Jack were supposedly attacked by an escaped lunatic. David insists that they were actually attacked by a large wolf. But Villiers had already been told there were witnesses and an autopsy report of the maniac, so they deduce that David is suffering from shock.

David begins to have a series of bizarre nightmares. In the first, he runs through the woods, then decapitates and eats a deer. In the second, he is in a hospital bed with a monstrous, fanged face. In the final dream, he is at home with his family when they are attacked by Nazis with monstrous faces and wielding machine guns.

While David is awake, Jack appears to him as a reanimated corpse, and explains that the pair of them were attacked by a werewolf, and that David himself is now a werewolf. Jack urges David to kill himself before the next full moon, not only because Jack is cursed to exist in a state of living death for as long as the bloodline of the werewolf that attacked them survives, but also to prevent David from inflicting the same fate on his eventual victims.

Trying to see if David is telling the truth, his doctor, Hirsch, takes a trip to the Slaughtered Lamb. When asked about the incident, the pubgoers deny any knowledge of David, Jack or their attacker. But one distraught pubgoer speaks to Dr. Hirsch outside the pub and says that David should not have been taken away, and that he and everyone else will be in danger when he changes. He's interrupted by another pubgoer, who remains silent. After more investigation, Dr. Hirsch finds out that the police report was "misplaced", and that David's wounds were cleaned and dressed before the authorities attended to him. The doctor is convinced that the whole town was lying, and that David was indeed attacked by some sort of animal, though he is not convinced it was a werewolf.

Upon his release from the hospital, David moves in with Alex Price, the pretty young nurse who grew infatuated with him in the hospital. He stays in Alex's London apartment, where they later make love for the first time. Jack (in an advanced stage of decay) suddenly appears to David again and tells him that he will turn into a werewolf the next day. Jack again advises David to take his own life; otherwise he is doomed to kill innocent people.

When the full moon rises, as Jack had warned, David, who is alone in the apartment, begins to feel excruciating pain before stripping naked upon "burning up" and turning into a werewolf. He prowls the streets and the London Underground and slaughters six Londoners. When he wakes in the morning, he is naked on the floor of the wolf cage at London Zoo with no memory of his activities, but unharmed by the resident wolves.

Later that day, David realizes that Jack was right about everything and that he is responsible for the murders of the night before. After failing to get himself arrested and running from Alex, David calls his family in New York to say good-bye, though he only speaks to his little sister. Walking out of the phone booth after failing to slit his wrists with his pocket knife, David sees Jack (in a more advanced stage of decay) outside an adult cinema in Piccadilly Circus. Inside, Jack is accompanied by David's victims from the previous night. They all insist that he must commit suicide before turning into a werewolf again. While talking with them, night falls and, consequently, David turns into a werewolf again and goes on another killing spree. After bursting out of the cinema (biting off Inspector Villiers' head in the process), a horrific melee ensues. David is ultimately cornered in an alley by police. Alex arrives to calm him down by telling him that she loves him. Though he is apparently temporarily softened, he is shot and killed when he lunges forward, returning to human form in front of a grieving Alex as he dies.

John Landis came up with the story while he worked in Yugoslavia as a production assistant on the film Kelly's Heroes (1970). He and a Yugoslavian member of the crew were driving in the back of a car on location when they came across a group of gypsies. The gypsies appeared to be performing rituals on a man being buried so that he would not "rise from the grave." This made Landis realize that he would never be able to confront the undead and gave him the idea for a film in which a man would go through the same thing.

Landis wrote the first draft of An American Werewolf in London in 1969 and shelved it for over a decade. Two years later, Landis wrote, directed, and starred in his debut film, Schlock, which developed a cult following. Landis developed box-office status in Hollywood through the successful comedy films The Kentucky Fried Movie, National Lampoon's Animal House and The Blues Brothers before securing $10 million financing for his werewolf film. Financiers believed that Landis' script was too frightening to be a comedy and too funny to be a horror film.

The film's ironically upbeat soundtrack consists of songs which refer to the moon. Bobby Vinton's slow and soothing version of "Blue Moon" plays during the opening credits, Van Morrison's "Moondance" as David and Alex make love for the first time, Creedence Clearwater Revival's Bad Moon Rising as David nears the moment of changing to the werewolf, a soft, bittersweet ballad version of "Blue Moon" by Sam Cooke during the agonizing wolf transformation and The Marcels' doo-wop version of "Blue Moon" over the end credits. Landis failed to get permission to use Cat Stevens' "Moonshadow" and Bob Dylan's "Moonshiner", both artists feeling the film to be inappropriate.[citation needed] On the DVD commentary, David Naughton and Griffin Dunne said they were unsure why Landis did not obtain rights to Warren Zevon's Werewolves of London as they felt the song would have been more appropriate for the film.

The budget of An American Werewolf in London was reportedly $10 million. The US box office totaled $30,565,292.

The film was also met with critical acclaim. Rotten Tomatoes gives the film a score of 89% based on reviews from 44 critics, compiled retrospectively. Kim Newman of Empire magazine praised the film, saying "Carnivorous lunar activities rarely come any more entertaining than this". Tom Huddlestone from Time Out also gave the film a positive review, saying the film was "Not just gory but actually frightening, not just funny but clever".

Halliwell's Film Guide described the film as a "curious but oddly endearing mixture of horror film and spoof, of comedy and shock, with everything grist to its mill including tourist Britain and the wedding of Prince Charles. The special effects are notable, and signalled new developments in this field."

Roger Ebert's review was less favourable; he stated that "An American Werewolf in London seems curiously unfinished, as if director John Landis spent all his energy on spectacular set pieces and then didn't want to bother with things like transitions, character development, or an ending."

The American Film Institute nominated it for ranking on its 100 Laughs list.

The film was first released on DVD in January 1998 by LIVE Entertainment according to a LIVE DVD Advertisement. Universal released a 20th anniversary "Collector's Edition" DVD on September 18, 2001. The high-definition version of the film was first released on HD DVD by Universal on November 28, 2006. A high-definition Blu-ray Disc and 2-disc standard-definition Region 1 DVD release of the film titled "An American Werewolf in London - Full Moon Edition" was released by Universal on September 15, 2009. The Region 2 DVDs and Blu-ray were released on September 28 and are known as "An American Werewolf in London - Special Edition" No DVD or Blu-ray version at present contains the film's original mono audio track.

The region 2 DVD release does not include a scene that is fully intact on the Region 1 release and all previous region 1 and 2 releases. The scene takes place near the end of the film where the character of David phones his parents from a public telephone box. All but the end of this scene had been cut from the Region 2 release because the distributors felt that use of a public phone box, as opposed to a mobile phone, would date the film.

As of October 2009 Universal said that they were scrapping all existing faulty stock and issuing replacement DVDs. All Blu-ray releases, however, are intact.

Retrieved from "https://movies.fandom.com/wiki/An_American_Werewolf_in_London?oldid=115643"
Community content is available under CC-BY-SA unless otherwise noted.