watch 02:03
Wiki Targeted (Entertainment)
Do you like this video?
Play Sound
Andrew Garfield 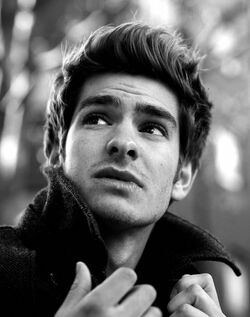 Andrew Garfield (born August 20, 1983 in Los Angeles, California) is an British-American actor and producer. His first professional roles were on the stage and in 2005 he made his TV debut in the Channel 4 teen series "Sugar Rush" (2005/I) in the UK. More TV work followed (reaching a wider UK audience in a two-part story in the third season of "Doctor Who" (2005)) as well as a number of movie appearances, but it was as Eduardo in The Social Network (2010) that he came to full international attention. That same year he joined the growing roster of non-Americans to be cast as superheroes when he was announced as the lead in what was then known as "Untitled Spider-Man Reboot" and which became The Amazing Spider-Man (2012).

Retrieved from "https://movies.fandom.com/wiki/Andrew_Garfield?oldid=86315"
Community content is available under CC-BY-SA unless otherwise noted.