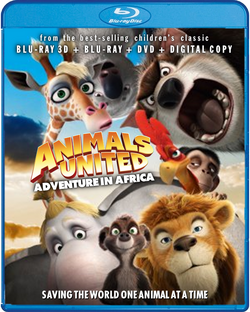 Animals United (German: Konferenz der Tiere) is a 2010 German 3D computer-animated comedy-adventure film directed and produced by Reinhard Klooss and Holger Tappe. It was released on 7 October 2010 in Germany. The film stars Ralf Schmitz and Thomas Fritsch as a meerkat named Billy and a lion named Socrates in the African Okavango Delta, who go on a quest to discover why their river has unexpectedly dried up. It is based on the 1949 book of the same name by Erich Kästner. The screenplay for the film was written by Oliver Huzly and Reinhard Kloos. An English dub version for Animals United stars James Corden, Stephen Fry, and Andy Serkis.

The film is set in Africa's Okavango Delta, and the main characters are a meerkat named Billy and a lion named Socrates. The annual flood has failed to arrive in the Delta, water has become scarce and the native animals fiercely fight over it. Billy and Socrates set out to find more water, and during their quest they meet a rag-tag group of animals from across the world: a polar bear named Sushi, a kangaroo named Toby, a Tasmanian devil named Smiley, two Galápagos tortoises named Winifred and Winston, and a chimpanzee named Toto, all of whom have had their lives ruined by humans in some way and have traveled to Africa. The animals soon discover the reason for the lack of water in the Delta: a dam has been constructed to supply energy for a luxury resort. Humans kidnap Socrates and hold him captive in the resort, so Billy leads the animals in a plan to free Socrates and break the dam to bring water back to the Delta. After the party, they all approach New York City with the blue whales.

The film was produced by German company Constantin Film. The film was animated in German, and looped by British voice actors into the English-language.

The soundtrack album for the film was composed by David Newman. It features songs performed by various artists, including Naturally 7, Charles Trénet and Xavier Naidoo. It was released on 7 December 2010 in Germany through Königskinder Music in CD and digital download formats, and is also available on iTunes.

All musical score tracks for the film written and composed by David Newman, except where noted.

Retrieved from "https://movies.fandom.com/wiki/Animals_United?oldid=182075"
Community content is available under CC-BY-SA unless otherwise noted.