Annabelle is a 2014 American supernatural horror film directed by John R. Leonetti, written by Gary Dauberman and produced by Peter Safran and James Wan. It is a prequel to 2013's The Conjuring and the second installment in the Conjuring Universe franchise. The film was inspired by a story of a doll named Annabelle told by Ed and Lorraine Warren. The film stars Annabelle Wallis, Ward Horton, and Alfre Woodard.

In Santa Monica, California, John Form, a doctor, presents his expectant wife Mia with a rare vintage porcelain doll as a gift for their first child to be placed in a collection of dolls in their daughter's nursery.

That night, the couple is disturbed by the sounds of their next door neighbors, the Higgins, being murdered during a home invasion. While Mia calls the police, she and John are attacked by the Higgins' killers. The police arrive and shoot one killer, a man, dead while the female killer commits suicide by slitting her throat inside the nursery while holding the doll. News reports identify the assailants as the Higgins' estranged daughter, Annabelle (Janice), and her unidentified boyfriend, both members of a cult.

In the days following the attack, a series of paranormal activities occurs around the Forms' residence. Afterwards, Mia gives birth to a healthy baby girl. She and John name their child Leah. The family rents an apartment in Pasadena and, after finding the doll that John had discarded since Annabelle's previous attack in one of their boxes, another set of paranormal events plagues Mia and her daughter. The next night Mia is haunted by a malevolent presence in her apartment. She believes it to be Annabelle's ghost after she encounters an enigmatic figure in the building's basement, who begins pursuing her before she escapes.

Mia calls back Detective Clarkin to gather information about Annabelle and the cultists and learns that the cult intends to summon supernatural beings. With the help of bookseller and fellow tenant Evelyn, Mia realizes that the cult practiced devil worship, which summoned a demon who followed the family after they moved to their apartment so as to claim a soul. Upon returning home, Mia and Leah are attacked by the demon who reveals itself while manipulating the doll. Mia and John contact their parish priest, Father Perez, who informs them that demons sometimes attach themselves to inanimate objects as an advantage to accomplish their goals and that a human soul must be offered for a purpose. Without any hopes of exorcising the demon out of the doll, Father Perez decides to take it away to seek help from the Warrens for investigation. But before he can enter the church, the demon impersonating Annabelle's spirit attacks him and grabs the doll.

The priest is hospitalized on the next day and, when John checks on him, Father Perez warns the latter that after sensing its powerful presence, the demon's true intention is to claim Mia's soul. That night, while Evelyn is visiting Mia, the demon uses Father Perez's physical form to sneak into the apartment and abduct Leah for her mother's soul. To spare her daughter, Mia attempts to jump out of the window with the doll but John arrives in time along with Evelyn to stop her. Evelyn decides to take her life in Mia's place instead as atonement for causing a car accident that resulted in the death of her daughter Ruby years ago. As the Forms are reunited, the demon and the doll disappear, while Leah is safely inside her crib.

Six months later, the doll is bought from an antique shop by a mother as a gift for her daughter Debbie, one of the nursing students from the prelude of the first film.

On November 8, 2013, a spin-off film of The Conjuring was announced to feature the Annabelle doll from the original film. 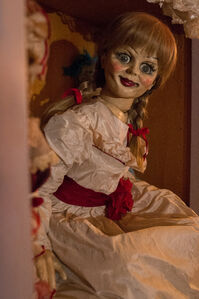 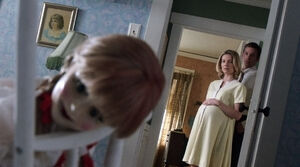 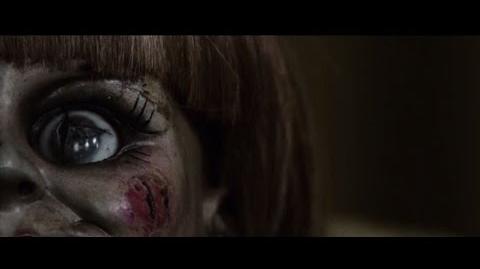