watch 00:59
The Loop (Movies)
Do you like this video?
Annabelle: Creation 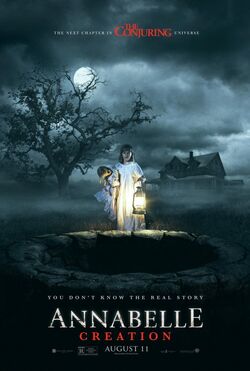 The film was released in the United States on August 11, 2017, by Warner Bros. Pictures. It serves as the second installment in the Annabelle film series. A third film is scheduled to be released in 2019, titled Annabelle 3.

In 1943, a dollmaker named Samuel Mullins and his wife Esther grieve for the loss of their seven-year-old daughter Annabelle, nicknamed "Bee", who dies when she accidentally steps in front of a car.

In 1955, the Mullins open their home to provide shelter for Sister Charlotte and six girls left homeless by the closing of their orphanage. Despite having been told not to enter Bee's locked bedroom, Janice, a young orphan crippled by polio, is awakened by a noise, discovers a note saying "find me", and sneaks into the room, which has mysteriously become unlocked. She finds a key for Bee's closet and unlocks it, where she sees an eerie porcelain doll. This unwittingly releases a powerful demon that begins to terrorize the girls, displaying a special interest in Janice.

On the second night, the demon continues to torment Janice, revealing its true form and declaring that it wants "her soul". Although she attempts to get away using a stairlift, she is left severely injured when caught by the demon and thrown from the second floor landing to the first floor. Janice is now confined to a wheelchair and she tells Sister Charlotte about the demon but Sister Charlotte dismissed it. The night after the incident, she sleeps in a different room and is tormented by the demon. The next morning, Janice is dragged into a shed. The demon, taking Bee's form, successfully possesses her. One of the other orphans, Janice's best friend Linda, notices changes in her behavior and admits to Samuel that Janice had snuck into Bee's room and found the doll two nights earlier. Shortly after Linda's revelation, the possessed Janice, who can now walk, transforms into the demon, and brutally kills Samuel.

Linda walks in to where Janice was sleeping and sees the creepy doll by her side. She throws it into the well, with Sister Charlotte noticing her. A strange noise comes out of the well and Linda is almost dragged into the well but Sister Charlotte saved her. Alarmed, Sister Charlotte speaks with the disfigured Esther, who is confined to her bedroom. Esther explains that after Bee's death, they prayed to whatever entity would grant their wish to see their daughter again. An unknown entity answered their prayer and though they briefly see Bee's spirit again, the entity convinces them to transfer its essence into one of Samuel's crafted porcelain dolls. They happily agreed but soon realize that they have attracted a demon looking for a human host. One night, Esther saw Bee's spirit, along with the porcelain doll, transforming into the demon, gouges out her left eye. Enlisting the help of priests to bless both the room and the house, they took the doll to Bee's room and locked it in a closet wallpapered with pages from the Bible. Esther then reveals she and Samuel opened their house as a shelter for the orphans to repent of their dealings but now regrets it, since she realized that this has provided an opportunity for the demon to look for a human host.

The demon crucifies Esther and bisects her body and slams Sister Charlotte against the wall, prompting the other orphans to leave the house. Linda is trapped in the house and hides in Bee's room as the possessed Janice tries to stab her. Sister Charlotte recovers and locks the possessed Janice and the doll inside the closet. The next day, police arrive to search the house and its surroundings and find only the doll inside the bedroom closet, which they remove as evidence. The orphans relocate somewhere else while Linda mourns that she won't see Janice ever again. Janice has escaped through a hole in the closet wall and relocates to an orphanage in Santa Monica. Still possessed, she becomes reclusive and calls herself Annabelle. The Higgins family soon adopts Annabelle.

Twelve years later, a grown-up Annabelle joins a Satanic cult and, along with her boyfriend, murders her adoptive parents, which catches the attention of their next-door neighbors, the Forms.

Retrieved from "https://movies.fandom.com/wiki/Annabelle:_Creation?oldid=271665"
Community content is available under CC-BY-SA unless otherwise noted.