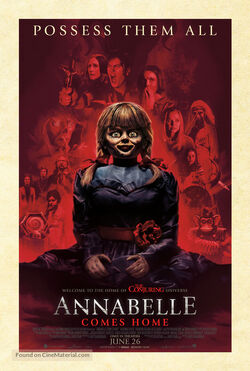 The film was released in the United States on June 26, 2019 by Warner Bros. Pictures. It serves as the next chapter in the Annabelle film series, following 2017's Annabelle: Creation, as well as the next entry in The Conjuring Universe.

The film is dedicated to Lorraine Warren, who died on April 18, 2019. The Warren's Occult Museum is in Monroe, Connecticut.

Demonologists Ed and Lorraine Warren confiscate the Annabelle doll from nurses Debbie and Camilla, who claim that the doll often performed violent activities in their apartment. During the drive back home, the doll summons spirits from a nearby cemetery to attack Ed, but he narrowly survives. Annabelle is locked in a sacred glass case in the couple's artifacts room that is blessed by Father Gordon to ensure the evil is contained.

One year later, the Warrens welcome Mary Ellen, who will be in charge of babysitting their daughter, Judy, at the house while they travel overnight to investigate another case. At school, Judy notices the spirit of a priest that begins following her. Mary's friend Daniela arrives uninvited to the Warrens' home, who is secretly curious about speaking to the dead. She sneaks into the artifacts room and starts examining them, ultimately trying to contact her late father. She abruptly leaves Annabelle's glass case unlocked, and the terror begins shortly afterward with the spirit of Annabelle "Bee" Mullins unleashed. That night, Annabelle begins releasing other spirits, such as the Ferryman, the Bride, a Feeley Meeley board game, the Samurai, and the Black Shuck.

Mary's crush Bob Palmeri arrives outside and serenades her, but is later attacked by the Black Shuck and hides in the Warrens' backyard. Mary is tormented by the Ferryman, while Judy is confronted by Annabelle in her bedroom. Daniela had left earlier but sneaks back to return the artifacts room's keys. She gets locked inside the room and tormented by various objects, such as a haunted Toy Monkey and an old television that can predict the near future. She finds the Mourner's Bracelet and sees her father twisted into a malevolent spirit. A bloody and screaming Daniela appears on the television screen after having answered a cursed telephone. The real Daniela later unwittingly reaches to answer the telephone but luckily Judy and Mary interrupted her.

Judy explains that they must lock Annabelle in her case again so the other spirits will rest. Bob protects Judy from the Black Shuck as she retrieves Mary's asthma inhaler, while Daniela is attacked and possessed by the Bride. Eventually, Mary and Judy find the doll when the priest's spirit, acting as Judy's guardian, guides them to the Ferryman. They manage to retrieve the glass case's key after they are attacked by demonic hands from the Feeley Meeley board game, and a possessed Daniela, but struggle to secure the case as the demon of the doll physically attacks them. Daniela recovers when Judy plays Ed's recorded footage of the Bride's exorcism, and helps put the doll back in the case. Judy tried aversing the spirits with a crucifix. After the case is locked, the disturbances cease as the spirits return to their slumber, and Bob reunites with the trio.

Ed and Lorraine return the next morning, and the girls approach them to recount the eventful night. Daniela apologizes to Lorraine, who gives her a comforting message from her father. Later, many friends gather to celebrate Judy's birthday party.