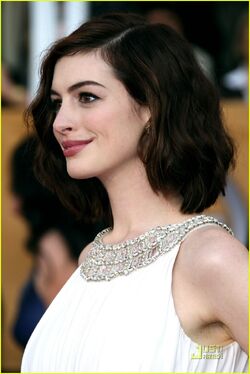 Anne Hathaway is an Oscar-nominated American actress and ceremony co-host. She has had starring and supporting roles in such Oscar-nominated film as Brokeback Mountain, The Devil Wears Prada, the Queen of Hearts in Alice in Wonderland, Selina Kyle aka Catwoman in The Dark Knight Rises (2012), Jewel in the Rio franchise (2011-2014), and earned a Best Actress nomination for her performance in the 2008 film Rachel Getting Married.

In 2011, Hathaway co-hosted the 83rd Academy Awards with James Franco. Critical response to their performances was not positive, and most critics judged the hosting duties of Hathaway and Franco as a mismatched affair, with some praising Hathaway's hosting duties while criticizing Franco's unease and lack of energy on stage. The duo's pairing was the first time since 1957 that a male-female partnership co-hosted the ceremony, and is the first awards telecast in which both shared the stage at the same time.

Retrieved from "https://movies.fandom.com/wiki/Anne_Hathaway?oldid=101333"
Community content is available under CC-BY-SA unless otherwise noted.