Captain America: Civil War (MCU)
Ant-Man and the Wasp (series)
Ant-Man is a 2015 American superhero film based on the Marvel Comics characters of the same name: Scott Lang and Hank Pym. Produced by Marvel Studios and distributed by Walt Disney Studios Motion Pictures, it is the 12th film in the Marvel Cinematic Universe (MCU). The film was directed by Peyton Reed from a screenplay by the writing teams of Edgar Wright and Joe Cornish, and Adam McKay and Paul Rudd. It stars Rudd as Scott Lang / Ant-Man alongside Evangeline Lilly, Corey Stoll, Bobby Cannavale, Michael Peña, Tip "T.I." Harris, Anthony Mackie, Wood Harris, Judy Greer, David Dastmalchian, and Michael Douglas as Hank Pym. In the film, Lang must help defend Pym's Ant-Man shrinking technology and plot a heist with worldwide ramifications.

Development of Ant-Man began in April 2006 with the hiring of Wright to direct and co-write with Cornish. By April 2011, Wright and Cornish had completed three drafts of the script and Wright shot test footage for the film in July 2012. Pre-production began in October 2013 after being put on hold so that Wright could complete The World's End. Casting began in December 2013, with the hiring of Rudd to play Lang. In May 2014, Wright left the project citing creative differences, though he still received screenplay and story credits with Cornish. The following month, Reed was brought in to replace Wright, while McKay was hired to contribute to the script with Rudd. Filming took place between August and December 2014 in San Francisco and Metro Atlanta.

Ant-Man held its world premiere in Los Angeles on June 29, 2015, and was released in the United States on July 17, as the last film in Phase Two of the MCU. It grossed more than $519 million worldwide and received positive reviews from critics, who generally welcomed the film's smaller stakes than other MCU films, as well as its cast (particularly Rudd, Peña, Lilly, and Douglas), humor, and visual effects. A sequel, Ant-Man and the Wasp, was released in 2018. A third film, Ant-Man and the Wasp: Quantumania, is scheduled for a February 2023 release.

In 1989, scientist Hank Pym resigns from S.H.I.E.L.D. after discovering their attempt to replicate his Ant-Man shrinking technology. Believing the technology would be dangerous if replicated, Pym vows to hide it for as long as he lives. In the present day, Pym's estranged daughter, Hope van Dyne, and former protégé, Darren Cross, have forced him out of his company, Pym Technologies. Cross is close to perfecting a shrinking suit of his own, the Yellowjacket, which horrifies Pym.

Upon his release from prison, well-meaning thief Scott Lang moves in with his old cellmate, Luis. Lang visits his daughter Cassie unannounced and is chastised by his former wife Maggie and her police-detective fiancé, Paxton, for not providing child support. Unable to hold down a job because of his criminal record, Lang agrees to join Luis' crew and commit a burglary. Lang breaks into a house and cracks its safe, but only finds what he believes to be an old motorcycle suit, which he takes home. After trying the suit on, Lang accidentally shrinks himself to the size of an insect. Terrified by the experience, he returns the suit to the house, but is arrested on the way out. Pym, the homeowner, visits Lang in jail and smuggles the suit into his cell to help him break out.

Pym, who manipulated Lang through an unknowing Luis into stealing the suit as a test, wants Lang to become the new Ant-Man to steal the Yellowjacket from Cross. Having been spying on Cross after discovering his intentions, Van Dyne and Pym train Lang to fight and to control ants. While Van Dyne harbors resentment towards Pym about her mother Janet's death, he reveals that Janet, known as the Wasp, disappeared into a subatomic Quantum Realm while disabling a Soviet nuclear missile. Pym warns Lang that he could suffer a similar fate if he overrides his suit's regulator. They send him to steal a device that will aid their heist from the Avengers' headquarters, where he briefly fights the Falcon.

Cross perfects the Yellowjacket and hosts an unveiling ceremony at Pym Technologies' headquarters. Lang, along with his crew and a swarm of flying ants, infiltrates the building during the event, sabotages the company's servers, and plants explosives. When he attempts to steal the Yellowjacket, he, along with Pym and Van Dyne, are captured by Cross, who intends to sell both the Yellowjacket and Ant-Man suits to Hydra. Lang breaks free and he and Van Dyne dispatch most of the Hydra agents, though one flees with a vial of Cross' particles and Pym is shot. Lang pursues Cross, while the explosives detonate, imploding the building as Pym and Van Dyne escape.

Cross dons the Yellowjacket and attacks Lang before Lang is arrested by Paxton. Cross takes Cassie hostage to lure Lang into another fight. Lang overrides the regulator and shrinks to subatomic size to penetrate Cross' suit and sabotage it to shrink uncontrollably, presumably killing Cross. Lang disappears into the quantum realm but manages to reverse the effects and returns to the macroscopic world. Out of gratitude for Lang's heroism, Paxton covers for Lang to keep him out of prison. Seeing that Lang survived and returned from the quantum realm, Pym wonders if his wife is alive as well. Later, Lang meets up with Luis, who tells him that Wilson is looking for him.

In a mid-credits scene, Pym shows Van Dyne a new Wasp prototype suit and offers it to her. In a post-credits scene, Wilson and Steve Rogers have Bucky Barnes in their custody. Unable to contact Tony Stark because of "the accords", Wilson mentions that he knows someone who can help.

Additionally, John Slattery and Hayley Atwell reprise their roles as Howard Stark and Peggy Carter, respectively, from previous MCU media. Slattery stated that his involvement in Ant-Man was "not that much more" than his participation in Iron Man 2, while Atwell described her appearance as being "more of a cameo". Abby Ryder Fortson portrays Cassie, the daughter of Lang and Maggie; Gregg Turkington appears as Dale, the manager of a Baskin-Robbins store; and Martin Donovan plays Mitchell Carson, a former member of S.H.I.E.L.D. who works for Hydra and looks to purchase the Yellowjacket technology. YouTuber Anna Akana portrays a writer in Luis' story at the end of the film. Garrett Morris, who portrayed Ant-Man in a Saturday Night Live sketch in the 70s, appears as a taxi driver. Ant-Man co-creator Stan Lee makes a cameo appearance in the film as a bartender. Chris Evans and Sebastian Stan make uncredited appearances during the post-credits scene as Steve Rogers / Captain America and Bucky Barnes / Winter Soldier, respectively. Hayley Lovitt makes a nonspeaking cameo as Janet van Dyne / Wasp. Lovitt was cast for her "saucer-like, Michelle Pfeiffer eyes", since Pfeiffer was Reed's dream casting for Wasp; Pfeiffer would later be cast as the character for the sequel, Ant-Man and the Wasp. Tom Kenny provides the voice of a toy rabbit that Scott gives to Cassie.

Ant-Man grossed $180.2 million in North America and $339.1 million in other territories for a worldwide total of $519.3 million. Deadline Hollywood calculated the net profit of the film to be $103.9 million, when factoring together "production budgets, P&A, talent participations and other costs, with box office grosses, and ancillary revenues from VOD to DVD and TV," placing it 14th on their list of 2015's "Most Valuable Blockbusters".

Ant-Man made $6.4 million from its Thursday night showings in North America, with 48% of tickets sales for IMAX and other large-format showings, and $23.4 million on its opening day, including Thursday's previews, making it the second-lowest opening day for a Marvel film, only ahead of 2008's The Incredible Hulk ($21.4 million). It fell 18% to earn $19.25 million on Saturday, and for its opening weekend total, earned $57.2 million.It marked the second-lowest debut for Marvel ahead of the $55.4 million debut of The Incredible Hulk in 2008. IMAX contributed $6.1 million to the opening gross, with premium large format screens comprising $6.4 million and Cinemark XDcomprising $1.3 million, respectively. Ant-Man continued Marvel's streak of number one opening films, giving the studio its twelfth consecutive win. Disney reported that the film drew the largest share of families (28%) and women (32%) of any Marvel superhero title. It was also the biggest live-action opening ever for Rudd (breaking Knocked Up's record of $30.7 million) and a record opening for Douglas. It continued to be the top film at the box office in its second weekend.

Outside North America, it earned $55.4 million in its opening weekend from 37 countries, debuting in third place at the international box office behind the Chinese film Monster Huntand Minions as well as an IMAX opening of $9.1 million. The top openings were the UK ($6 million), Mexico ($5.6 million), and Russia ($4.9 million). It had the biggest opening for a first-installment Marvel film in Hong Kong, Indonesia, Malaysia, the Philippines, Singapore, Taiwan, and Thailand. The film's opening in South Korea in early September 2015 earned $9.3 million, the highest opening for an international market at the time, before being surpassed by the Chinese opening in mid-October 2015, which earned $42.4 million, with $5.1 million coming from IMAX. The large opening weekend in China helped Ant-Man place first at the international box office for the first time, with the Chinese opening the second largest for an MCU film in the country behind Avengers: Age of Ultron. The film stayed at number one in China for a second week, earning an additional $22 million. As of November 1, 2015, the largest markets are China with $101.3 million, followed by the UK with $25.4 million, and South Korea with $18.9 million.

The review aggregator website Rotten Tomatoes reported an 83% approval rating with an average score of 6.9/10, based on 333 reviews. The website's consensus reads, "Led by a charming performance from Paul Rudd, Ant-Man offers Marvel thrills on an appropriately smaller scale – albeit not as smoothly as its most successful predecessors." On Metacritic, the film has an average score of 64 out of 100, based on 43 critics, indicating "generally favorable reviews". CinemaScore reported that audiences gave the film an "A" grade on an A+ to F scale, while those at PostTrak gave it 4 out of 5 stars.

A sequel, Ant-Man and the Wasp, was released on July 6, 2018, with Reed returning as director. Production writers Barrer and Ferrari wrote the screenplay with Rudd, Chris McKenna, and Erik Sommers. Rudd, Lilly, Cannavale, Peña, Harris, Greer, Dastmalchian, Fortson and Douglas all reprise their roles from Ant-Man, and are joined by Michelle Pfeiffer as Janet van Dyne, Laurence Fishburne as Bill Foster, Hannah John-Kamen as Ghost, Randall Park as Jimmy Woo, and Walton Goggins as Sonny Burch.

A third Ant-Man film, titled Ant-Man and the Wasp: Quantumania, is scheduled to be released on February 17, 2023, with Reed returning to direct and Jeff Loveness writing the script. Rudd, Lilly, Douglas, and Pfeiffer reprise their roles, while Kathryn Newton takes over as Cassie Lang. Jonathan Majors joins as Kang the Conqueror. 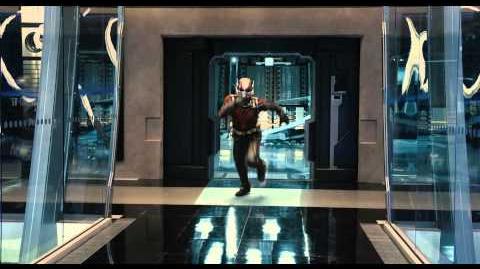