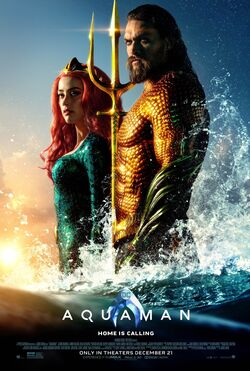 Aquaman is an upcoming American superhero film based on the DC Comics character of the same name. It is intended to be the sixth installment in the DC Extended Universe (DCEU). The film is directed by James Wan, with a screenplay by David Leslie Johnson-McGoldrick and Will Beall, from a story by Wan, Beall, and Geoff Johns. It stars Jason Momoa as the title character, with Amber Heard, Willem Dafoe , Patrick Wilson, Dolph Lundgren, Yahya Abdul-Mateen II, and Nicole Kidman in supporting roles. It is the third live-action theatrical film featuring the title character, following Batman v Superman: Dawn of Justice (2016) and Justice League (2017), and will be the first full-length feature film centered around the character. In Aquaman, Arthur Curry, the heir to the underwater kingdom of Atlantis, must step forward to lead his people against his brother, Orm, who seeks to unite the seven kingdoms against the surface world.

Talks of an Aquaman film began in 2004, with several plans falling through over the years. In August 2014, Beall and Kurt Johnstad were hired to write two competing scripts, and the film was officially announced in October 2014. Wan signed on as director in April 2015 and in July 2016 it was announced the film would move forward with Beall's screenplay, although Wan, Johnstad, Johns and Johnson-McGoldrick all performed various rewrites. Much of the main cast was confirmed throughout 2016. Principal photography began in Australia on May 2, 2017, with most of the film shot at Village Roadshow Studios in Gold Coast, Queensland, and wrapped on October 21, 2017.

Aquaman is scheduled to be released in the United States by Warner Bros. Pictures in RealD 3D, Dolby Cinema and IMAX 3D on December 21, 2018.

Following the events of Justice League, Arthur Curry, the reluctant ruler of the underwater kingdom of Atlantis, is caught in a battle between surface dwellers that threaten his oceans and his own people, who are ready to lash out and invade the surface.

Additionally, Ludi Lin portrays Murk , the Captain of the Men-of-War, the frontline army of Atlantis; Temuera Morrison portrays Thomas Curry : Arthur Curry's father and a lighthouse keeper; Randall Park portrays Dr. Stephen Shin , a marine biologist who was friends with Thomas Curry; Michael Beach portrays Jesse Kane, a member of a group of boatjackers and Black Manta's father. Djimon Hounsou, Natalia Safran, and Sophia Forrest were cast as the Fisherman King, Fisherman Queen, and the Fisherman Princess whom Orm creates alliance with as part of his plan to unite the seven kingdoms. Graham McTavish has been cast in an undisclosed role.

In 2004, FilmJerk.com reported that Sunrise Entertainment's Alan and Peter Riche planned to bring Aquaman to the big screen for Warner Bros. with Robert Ben Garant writing the screenplay. However, the film fell through. In July 2009, it was reported that Aquaman was in development at Leonardo DiCaprio's Appian Way. Warner chairman and CEO Barry Meyer said that the Aquaman film was in development. A source from Warner Bros. told The Wrap that they were discussing the possibilities, with the mention of more Man of Steel movies as well as a Superman/Batman film, a Wonder Woman film, and an Aquaman film. Geoff Johns told Variety that Aquaman is a priority character for the company. It was announced on August 12, 2014, that Warner Bros. had hired screenwriters Will Beall and Kurt Johnstad to pen two separate scripts for an upcoming Aquaman film. The film was being developed on dual tracks, meaning that two scripts were written, one by Beall and one by Johnstad, but only the better version would move forward.

On April 10, 2015, The Hollywood Reporter reported that James Wan was the frontrunner to direct the film. In June 2015, Wan was confirmed to direct the film and overlook the screenplay by Kurt Johnstad. On November 12, 2015, David Leslie Johnson was hired to write the script, however it was unclear whether he would be writing a separate script or working with Wan. It was then revealed that previous script plans had been scrapped and that both Wan and Johns planned to move forward with a new script written by screenwriter Will Beall. Later, Johnson was brought back to the project to work on a rewrite of Beall's script.

On March 2016, it was announced that the events of Aquaman will be set after Justice League. Wan confirmed later on Twitter that cinematographer Don Burgess, who previously worked with Wan on The Conjuring 2, will serve as cinematographer for Aquaman. Pre-production began in Australia in late November 2016.

On October 20, 2014, in an interview with ComicBook.com, Jason Momoa revealed that the Justice League film would be coming first and that's what they were preparing for, and he didn't know if the solo Aquaman film would come before or after Justice League. He thought it might be the origin, where Aquaman came from. Warner Bros. announced Aquaman as a part of the DC Extended Universe, with Jason Momoa starring. In December 2014, it was revealed that Momoa had signed a four-picture deal with the studio and DC, and he wanted Zack Snyder to direct the solo Aquaman film. On January 13, 2016, The Hollywood Reporter announced that Amber Heard entered negotiations to play the female lead role of Mera, Aquaman's love interest; her casting was confirmed two months later.In April 2016, Willem Dafoe was cast in an undisclosed role, later revealed to be Nuidis Vulko. On December 12, 2016 it was confirmed that Patrick Wilson will play the villainous Ocean Master, the half-brother of Aquaman. On January 31, 2017, Yahya Abdul-Mateen II was added to the cast as the villain, Black Manta. That same day, the press reported that Nicole Kidman had entered talks to play Queen Atlanna. Two months later, Kidman confirmed her participation in the film. By February 2017, New Zealand actor Temuera Morrison entered talks to play Thomas Curry, Aquaman’s human father. On April 12, Dolph Lundgren was cast to play Nereus, king of Xebel. Ludi Lin was cast in the film on May 15, 2017. Almost two weeks later, Michael Beach, who voiced Devil Ray, a character loosely based on Black Manta in Justice League Unlimited, was cast as Black Manta's father. In October 2017, Graham McTavish revealed that he has a role in the film. In April 2018, Randall Park was cast as Dr. Stephen Shin. In July, Djimon Hounsou, Natalia Safran and Sophia Forrest were cast as the Fisherman King, Fisherman Queen and the Fisherman Princess.

Principal photography began in Australia on May 2, 2017, under the working title Ahab. A majority of the film was shot at Village Roadshow Studios in Gold Coast, Queensland with production also held in Newfoundland, Canada, as well as Italy and Morocco. Between May and August 2017, production also took place on location around a number of places of the Australian Gold Coast including Main Beach, Coomera, Southport and Amity Point in North Stradbroke Island in Queensland as well as Hastings Point in New South Wales. On filming underwater sequences, Wan stated that "the underwater world is super complicated" and "it's not an easy shoot". On August 11, 2017, filming began on the Arthur Curry Lighthouse set at Hastings Point and ended later that month. In September, during an interview with Kiss Radio, actor Ludi Lin described Wan's vision for the film as 'Star Wars underwater'. That same month, filming took place in Newfoundland and Labrador.[55] Willem Dafoe finished up his part by late September. On October 13, James Wan announced that Patrick Wilson wrapped on the film. Filming on location took place in the deserts of Morocco by mid-October, which included the cities of Merzouga and Erfoud. Principal photography wrapped on October 21, 2017.

On March 7, 2018, Rupert Gregson-Williams was announced as the composer for Aquaman. Gregson-Williams previously wrote the score for Wonder Woman, the fourth film in the DC Extended Universe.

In March 2017, a first look at Aquaman was shown prior to shooting during the CinemaCon convention in Las Vegas, Nevada with Momoa introducing a video of director James Wan showing off a concept art sizzle reel for the movie. Later, on July 22, the film's first footage made its debut at San Diego Comic-Con (SDCC) 2017 with a teaser presented by Momoa during the Warner Bros.'s panel at Hall H; director James Wan presented the footage stating that "in a lot of ways, this is an origin story", referring to the film. In April 2018, another teaser with new rough footage was shown off by Wan and Momoa at CinemaCon, joined by Amber Heard, Patrick Wilson and Yahya Abdul-Mateen II on stage. In an interview with Entertainment Weekly during the event, Wan teased the conflict between Arthur Curry and his half-brother and main antagonist in the film, Orm / Ocean Master, stating that "it's almost a very classic Shakespearean story about brother from another world vs. brother from another world. And it really is a classic story of sibling rivalry". On June 11, 2018, the film's first trailer was previewed at the European exhibitors’ conference CineEurope in Barcelona, Spain. A first look at Black Manta, Ocean Master, Queen Atlanna and Nuidis Vulko were revealed by Entertainment Weekly on June 14, 2018. Wan announced that the first trailer will premiere at San Diego Comic-Con (SDCC) 2018. The cast is also set to appear as guests at the late-night talk show Conan with Conan O'Brien during SDCC, on Sunday, July 22. On July 16, 2018, an official teaser poster was released. On July 21, 2018, the first trailer was released at the SDCC 2018, being considered the best received trailer during the international convention; it was attached to theatrical showings of Teen Titans Go! To the Movies and Mission: Impossible - Fallout.

Retrieved from "https://movies.fandom.com/wiki/Aquaman?oldid=144227"
Community content is available under CC-BY-SA unless otherwise noted.