Start a Wiki
watch 01:27
The Loop (Movies)
Do you like this video?
Arbitrage 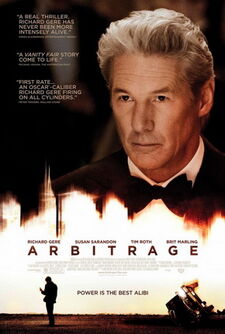 Sixty-year-old billionaire hedge fund manager Robert Miller (Richard Gere) has cooked his company's books in order to cover an investment loss and avoid being arrested for fraud. One night, while driving with his mistress (Laetitia Casta), he begins to doze off and has an accident in which she is killed. Although injured, Miller leaves the scene as the car goes up in flames. Now, in order to prevent the public, and his wife (Susan Sarandon), from discovering the truth, he tries to cover up his involvement. At the same time, he tries to avoid the police detective investigating the case, (Tim Roth) who is sure that Miller has committed murder. While all this is going on, Miller's daughter (Brit Marling), who works in his company, discovers that Miller cooked the books and realizes that she could be implicated.

Retrieved from "https://movies.fandom.com/wiki/Arbitrage?oldid=53592"
Community content is available under CC-BY-SA unless otherwise noted.