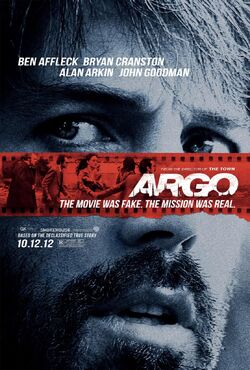 Argo is an Oscar-winning political drama film about the rescue of six U.S. diplomats from Tehran, Iran during the 1979 Iran hostage crisis. Filming began in September 2011, and was released on October 12, 2012 to both critical and commercial success.

During the 1979 Iran hostage crisis, the governments of the United States and Canada partnered to rescue six U.S. foreign service members who had evaded the hostage-taking at the takeover of the American embassy in Iran. The governments were able to convince Iran that the six hostages were members of a film crew who were scouting the area for a movie titled Argo. The hostages were able to escape the country under their fake identities.[1]