View src
watch 01:33
House of the Dragon Trailer - The Loop
Do you like this video?
Play Sound
Armie Hammer 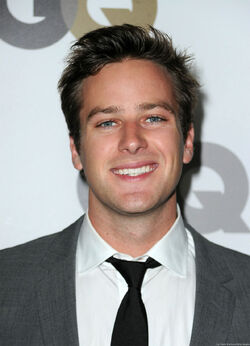 Armand "Armie" Douglas Hammer (born August 28, 1986 in Los Angeles, California) is an American actor best known for his role playing the Winklevoss twins in The Social Network, a film that was nominated for many Academy Awards. In 2011, he starred in J. Edgar alongside Leonardo DiCaprio, and in 2012 he played Prince Alcott in Mirror Mirror: The Untold Adventures of Snow White with Julia Roberts. Perhaps Hammer's biggest role came in 2013, when he starred as John Reid in Disney's The Lone Ranger.

He married actress, model and television personality Elizabeth Chambers in 2010 and the couple had a daughter, Harper, who was born on December 1, 2014.