watch 01:28
The Loop (Movies)
Do you like this video?
August: Osage County 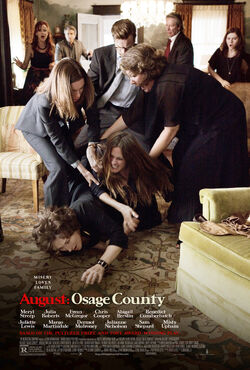 August: Osage County is an upcoming 2013 American black comedy-drama film based on Tracy Letts' play of the same name. The film is directed by John Wells, written by Letts himself, and produced by George Clooney, Jean Doumanian, Grant Heslov, Steve Traxler, and Bob and Harvey Weinstein. The ensemble cast is led by Meryl Streep and Julia Roberts.

A look at the lives of the strong-willed women of the Weston family, whose paths have diverged until a family crisis brings them back to the Oklahoma house they grew up in, and to the dysfunctional woman who raised them.

Retrieved from "https://movies.fandom.com/wiki/August:_Osage_County?oldid=119472"
Community content is available under CC-BY-SA unless otherwise noted.