watch 01:45
The Loop (Movies)
Do you like this video?
Play Sound

Back to the Future

Back To The Future was written by Bob Gale and Zemeckis, and starred Michael J. Fox and Christopher Lloyd. The movie opened on July 3, 1985 and grossed US$210 million at the US box office, making it the highest grossing film of 1985. On December 17, 2002, Universal Home Video released Back to the Future: The Complete Trilogy on DVD and VHS.

Following the completion of the film series, two more spin-off projects surfaced. CBS TV aired an animated series, Back to the Future: The Animated Series, while Harvey Comics (publishers of Casper the Friendly Ghost) released a handful of similarly styled comic books, although their stories were original and not merely duplicates of the cartoon.

Marty McFly, a 17-year old high-school senior (played by Fox), is an avid skateboarder and electric guitarist. Marty is invited by his friend Dr. Emmett Brown (Lloyd), an eccentric local scientist, to witness a demonstration of Doc's latest invention: a time-machine made from a modified DeLorean sports car, which must reach 88 miles-per-hour in order to travel through time. At first, Doc tests the car by sending his dog, Einstein (named after Albert Einstein), one minute into the future. Following the successful test, a group of Libyan terrorists (from whom Doc had acquired stolen plutonium necessary to fuel the time machine, and in return gave them what they thought was a plutonium powered bomb that was actually a bomb casing filled with old pinball machine parts) come looking for revenge. The Libyans open fire on Doc Brown, unloading a barrage of bullets into his chest. Marty escapes from the Libyans in the DeLorean; while doing so, he inadvertently travels back in time to the year 1955.

In the past, Marty accidentally interferes with the first meeting of his parents George McFly and Lorraine Baines, an act with seismic cosmic significance, as it jeopardizes Marty's own existence. This occurs when Lorraine falls in love with Marty instead of George. Marty meets his mother's 1955 family and then heads off to find Doc, who is skeptical at first about Marty's account. Doc in 1955 is not yet a successful inventor. Doc in 1985 entered the year 1955 into the time machine because that was when he fell and had the vision of the flux capacitor ("which is what makes time travel possible"). Marty uses this information to convince Doc that he really is from the future.

Marty carries a snapshot of himself with his sister and brother, and 1955 Doc Brown discovers they are fading out, first Dave, the oldest, then Linda. Marty finds himself stranded, not having brought any additional plutonium back with him. The plutonium is used to create the "1.21 gigawatts" of electricity used to power the flux capacitor. Doc explains that only a bolt of lightning has the sufficient power required. Marty then remembers he was given a fundraising flyer in 1985 that recounted the story of how the town clock tower was struck by lightning the following Saturday in 1955. With Doc's help, they find a way to send Marty back to the future: using a lightning bolt for power that the flier reports will strike the clock tower at exactly 10:04 p.m. Saturday. They will rig the DeLorean to channel the lightning into the flux capacitor, sending Marty back to 1985. However, a greater problem has occurred: his mother is now infatuated with him, having never met his father and Marty has triggered a Grandfather paradox which will avert his own birth. Now Marty must not only get his parents together, but do it before the lightning hits the clock tower.

While attempting to hook his parents up with each other, Marty has trouble with the school bully, Biff Tannen, who is also after Lorraine. In one instance, Biff and his cronies chase him while Marty gets a makeshift skateboard, and they crash into a manure truck. Unfortunately, this only makes Lorraine even more attracted to Marty. While Marty is trying to get George to ask her to their school's "Enchantment Under the Sea" dance, Lorraine comes and asks Marty to the dance.

Marty realizes his best chance to have the two get together is at the school dance where George originally first kissed Lorraine, the night of the lightning storm. Marty's plan is to 'take advantage' of Lorraine in the car, so that George can rescue her, which would put him in a good light. Lorraine reveals that she is more than willing to let Marty take advantage of her, having snuck out some liquor for the event. However, Lorraine and Marty kiss, which triggers Lorraine to say that kissing Marty was like "kissing my brother", which stops the possibility of Lorraine accidentally triggering an incestual relationship. Biff arrives instead of George, gets in the car with Lorraine, and tells his gang to take Marty "around back," where they lock him in the trunk of a car. When George arrives, expecting Marty, he finds Biff harassing Lorraine instead; Biff gets out of the car and almost breaks George's arm. When George sees Biff push Lorraine to the ground and laugh at her, he becomes infuriated with him and he knocks Biff out with a punch. George and Lorraine head off to the dance just in time for Marty to see they have reunited for the dance after being freed from the car he was locked in.

Marty is still not certain of his future without witnessing his parents' first kiss, however the band's guitarist, Marvin Berry, cut his hand open while getting Marty out of the car's locked trunk, which would mean the dance is over. Marty volunteers to play the guitar, and during the first number, Earth Angel, someone cuts in between George and Lorraine. Dave and Linda are long gone from the photograph and Marty, to his horror, begins to fade out from the picture - and erase in reality (he watches his own hand and arm begin to disappear).

George pushes away the person who cut in, and then kisses Lorraine. Marty begins playing the guitar again with renewed strength, and realizes from the photograph that Linda and Dave have reappeared. While playing another song, Johnny B. Goode, Marty gets carried away, eventually reverting into typical early 1980s stage play (including kicking over his amplifier in imitation of The Who, lying on the stage kicking his legs in imitation of Angus Young, playing behind his head like Jimi Hendrix and tapping in the style of Eddie Van Halen), resulting in a blank stare from the audience. Which ends with Marty telling the audience "I guess you guys aren't ready for that yet. But your kids are gonna love it."

Marty leaves the gym after talking with his parents and giving them the inspiration for his name. Marty reaches the clocktower, where Doc has suspended a cable from the top of the tower to two lamp posts on the street below to channel the lighting into the DeLorean. However, a tree limb falls onto the cable, disconnecting the wire forcing Doc to have to climb to the top of the tower and reconnect the cable. Prior to climbing up the tower, Doc discovers a note from Marty in his coat pocket (which contains a warning him about his future death) although he has no idea what it is except that it is about the "future". Upset that Marty tried to tell him about the future,because he saw it as messing with time, Doc tears up the letter, saying that "the consequence could be disastrous." Doc climbs up the clock tower to reconnect the wires, while Marty charges toward the lamp posts in the DeLorean. While Doc connects the wire on top of the tower, he accidentally severs the connection to the lampost. Doc slides down the wire and reconnects the cable, just as the lightning hits the tower. Marty then speeds through the electrified wire, sending the DeLorean back to the future.

Marty returns to 1985, ten minutes before he left due to his setting the destination coordinates back 11 minutes, so he would have enough time to stop Doc's impending death. But the car's starter stops working, and he has to run to the mall, where he sees himself driving the DeLorean back in time from the start of the movie, and causing the terrorists to crash into a photo booth. However, Marty is still unable to save Doc from getting shot. Marty rushes down to Doc's body and turns away in tears, but Doc sits up. He reveals he wore a bulletproof vest under his radiation suit. Doc then pulls out the letter Marty wrote him, taped up from 30 years before.

Doc drives Marty home, then heads 30 years into the future. In the morning, Marty discovers his house is different; there is a nicer car in the driveway, Linda and Dave appear much more successful (in the beginning of the movie the family is depicted much more like lower-class people) and Lorraine and George are much closer and loving to one another (and a little more glamorous looking) than he remembers. A humble Biff (who instead of being George's supervisor, now runs an auto detailing service) runs in with the delivery of George's first novel, a work of science fiction. Also, Marty finds that the Toyota pick-up truck that he previously coveted is now his. Just as Marty and his girlfriend Jennifer are about to take a ride in the truck, Doc reappears in the DeLorean, telling Marty that something has got to be done about their kids, and hurries him and Jennifer into the car. Marty points out that there is not enough road to accelerate to 88 mph, but Doc says "Roads? Where we're going we don't need roads" and flies off in the now hover-converted car, which turns around and comes hurtling towards the viewer to end the movie. The ending was reshot for the sequel Back To The Future Part II because Elisabeth Shue played Jennifer in the two sequels.

The series was very popular in the 1980s, even making fans out of celebrities like ZZ Top (who appeared in the third film) and President Ronald Reagan, who referred to the movie in his 1986 State of the Union address when he said, "Never has there been a more exciting time to be alive, a time of rousing wonder and heroic achievement. As they said in the film Back to the Future, 'Where we're going, we don't need roads.'" He also considered accepting a role in the third film as the 1885 mayor of Hill Valley but eventually declined. The hip, upbeat soundtrack, featuring two new songs by Huey Lewis and the News, contributed to the film's popularity. "The Power of Love" became the band's first song to hit number one on the Billboard Hot 100 and was nominated for an Academy Award.

Sequels were not initially planned. Zemeckis later stated that the original ending to the first film would have been rewritten so that Marty's girlfriend would not have been included. In addition, the "To Be Continued..." caption, according to Zemeckis, was not added until the film was released to video at which time plans for a sequel (eventually two sequels) had been announced (the filmmakers chose to omit the caption from the 2002 DVD release). Ultimately, the sequels did not fare quite as well at the box office. While the first installment grossed $218 million (making it the biggest-earning movie of 1985), Parts II (fall of 1989) and III (summer of 1990) made roughly $125 million and $90 million, respectively (still making the movies hits, but not major hits). It is usual for sequels to suffer from diminishing returns, and in this case the box office may have also been affected by Part III being released so soon after Part II. 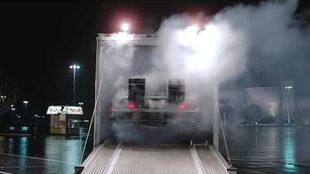 Back To The Future Trailer
Trailer

Wikiquote has a collection of quotations from or about:
Back to the Future
Retrieved from "https://movies.fandom.com/wiki/Back_to_the_Future?oldid=266484"
Community content is available under CC-BY-SA unless otherwise noted.