Back to the Future Part III

PG
Back to the Future Part III is the third and final installment of the Back to the Future trilogy. The film is a science fiction western, using the time travel premise of the series to take Marty McFly (Michael J. Fox) and Dr. Emmett Brown (Christopher Lloyd) back to the |Old West of 1885.

After lightning strikes the clock tower, Marty McFly (Michael J. Fox), who is stranded in 1955, takes "Doc" Emmett Brown (Christopher Lloyd) home. He explains to the Doc of that era that Doc's future self and the DeLorean time machine were accidentally sent back to the year 1885. Marty learns from a letter written by Doc in 1885, that the DeLorean is hidden in an old mineshaft. The letter instructs Marty to find the car, return to 1985, and then destroy it in order to prevent further disruption of the space-time continuum.

With the help of the Doc of 1955, Marty retrieves the DeLorean. In the process, he discovers a tombstone which leads him to learn that Doc was killed in 1885 by Buford "Mad Dog" Tannen, just seven days after having written the letter. Ignoring Doc's urging to return to 1985, Marty decides that he must save Doc, who had no idea he would be killed days later. Marty takes the DeLorean back to 1885, and arrives in the middle of a skirmish between a group of Native Americans and the United States cavalry, resulting in the DeLorean's fuel line being ruptured. After hiding the car, Marty treks towards town, encountering his great-great-grandparents who had recently arrived in America from Ireland. To mask his identity, he takes up the name "Clint Eastwood." After arriving in Hill Valley and nearly avoiding a skirmish with Buford, Marty reunites with Doc, who agrees to leave when he learns of his upcoming fate. Doc sees Marty's photograph of his tombstone and concludes from the inscription that he was to have fallen in love with a woman named "Clara." Learning that the new schoolmarm he has promised to pick up is named Clara Clayton, Doc decides to leave without meeting her.

However, the ruptured fuel line has left the DeLorean's gas tank completely empty and the DeLorean cannot reach 88 miles per hour without gasoline. After several failed attempts to accelerate the car through alternate means, Doc decides to push the DeLorean up to speed with a steam locomotive, but finds that the only track straight enough ends in an incomplete bridge over a deep ravine. The car will have to reach 88 miles per hour before reaching the bridge, so that it can travel to 1985 where the bridge is completed. As they scout the location, they save a woman from falling into the ravine on a runaway carriage, only to discover that she is Clara Clayton. She and Doc immediately become enamored with each other. They also learn that as a result the ravine is no longer named "Clayton Ravine."

At a festival dedicating the newly constructed clock tower, Buford attempts to kill Doc, only to be thwarted by Marty. Marty, however, is goaded into a gun duel after Buford calls him "yellow". With Doc's original death averted, his name disappears from the tombstone in the photograph, but the date remains. Doc warns Marty that 'his' name may end up on it if he chooses to meet up with Buford. Still infatuated with Clara, the Doc expresses his desire to stay with her in 1885, but Marty talks him out of it. Doc decides to say goodbye to her and, when pressed, tells her that he's from the future. Thinking this an obvious lie, Clara angrily slaps him in rejection and starts to cry as Doc heads to the town saloon to get drunk. Marty convinces him to leave the saloon, but not before Buford shows up and captures Doc in their flight attempt. Marty is forced to participate and defeats Buford by using a stove cover as a bullet-proof shield. Following the duel, Buford is arrested for having committed a stage coach robbery the previous day. When Marty consults the photograph of the tombstone he had discovered in 1955, he sees that it has disappeared entirely. Clara, meanwhile, hears about how heartbroken Doc Brown was when she rejected him and sets off to find him.

Doc and Marty manage to hijack the locomotive and start to push the DeLorean; Marty waits in the DeLorean while Doc remains on the train to add specially-created logs to the boiler that will overheat it and increase its speed. Clara catches up with the locomotive on horse and climbs aboard as Doc makes his way to the DeLorean. Seeing Clara in the cab, he is forced to return for her, and manages to fly off with her on the hoverboard just as the DeLorean reaches 88 miles per hour and transports Marty back to 1985 alone. The locomotive, which subsequently runs past the track, takes a nose-dive into the ravine and explodes.

As planned in the parallel year 1985, Marty coasts safely across the ravine bridge, now called "Eastwood Ravine," but he immediately encounters a modern-day diesel locomotive bearing down on him. Marty escapes, but the DeLorean is smashed to pieces. Marty picks Jennifer up at her house where he left her in Part II, and having learned his lesson back in 1885, refuses to take part in a drag race with Needles, who calls him 'chicken.' This causes him to avoid the automobile accident which resulted in the ruined future depicted in the previous film, as evidenced by the erasure of the fax Jennifer obtained from the future. Marty takes Jennifer to the site of the destroyed DeLorean, where he accepts that it is what Doc wanted. At that moment, however, a time machine built out of a locomotive appears. The door opens to reveal Doc, Clara and their two sons, who are named Jules and Verne (before appearing in Back to the Future: The Animated Series) after the author Jules Verne. Jennifer then asks Doc about the fax she got from the future is now erased. Doc simply replies that it's erased because the future has not been written yet. Their "future is what they make of it." As Doc prepares to leave again, Marty asks if he plans to go back to the future. Doc replies that they've already been there, and the train — which has been futuristically upgraded — lifts off from the ground and flies off into time, mirroring the end of the first film of the trilogy.

teaser for the film, at the end of Part II

Blu-ray
Add a photo to this gallery 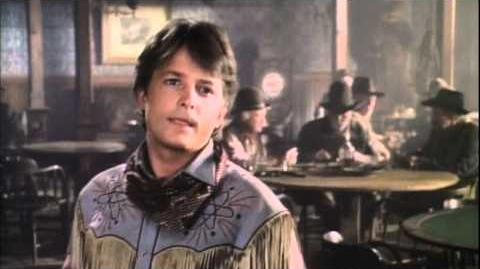 The movie grossed US$23 million in its first weekend of US release and $87.6 million altogether in US box office receipts – $243 million worldwide. On December 17, 2002 Universal Studios released Back to the Future Part III in a boxed set with the first two films on DVD and VHS which did extremely well. In the DVD widescreen edition there was a minor framing flaw that Universal has since corrected, available in sets manufactured after February 21, 2003.

In 1990 the movie won a Saturn Award for Best Music for Alan Silvestri and a Best Supporting Actor award for Thomas F. Wilson. In 2003 it received AOL Movies DVD Premiere Award for Best Special Edition of the Year, an award based on consumer online voting. The film received a Thumbs Up from Gene Siskel and a very marginal Thumbs Down from Roger Ebert on Siskel & Ebert which is the exact opposite of their opinions on Back to the Future Part II.

LJN released an NES game called Back to the Future Part II & III, a sequel to their game based on the first movie. An arcade Back to the Future Part III game was also released that would eventually be ported to several home video game systems, including the Sega Genesis. However, the games ended up being a critical flop due to their odd level design, and few references to the films (In the video game Back to the Future there are no settings, events, items or characters from the movie other than Marty). Gametrailers.com placed it at number eight in their "Top Ten Worst Movie Based Games."

Retrieved from "https://movies.fandom.com/wiki/Back_to_the_Future_Part_III?oldid=185263"
Community content is available under CC-BY-SA unless otherwise noted.