Start a Wiki
watch 01:38
The Loop (Movies)
Do you like this video?
Bad Kids Go to Hell 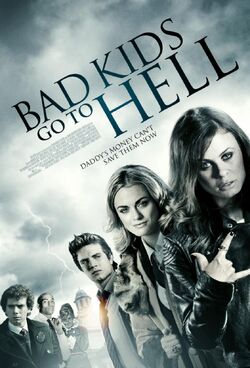 Bad Kids Go to Hell is a 2012 film based on the best selling graphic comics/novel of the same name directed by Matthew Spradlin. Although the theatrical release date scheduled a limited release October 27, 2012 followed by a release nationwide December 7, 2012, it had numerous free screenings throughout the US and Canada in advance of the actual release date in order to give fans of the best selling comic book series/graphic novel a chance to see the movie first. Advanced screenings included San Diego Comic-Con, Stan Lee's Comikaze Expo, and Special Event screenings at Studio Movie Grill stadium theater locations across the US.

On a stormy Saturday afternoon, six students from Crestview Academy begin to meet horrible fates as they serve out their detentions. Is a fellow student to blame, or perhaps Crestview's alleged ghosts are behind the terrible acts?

Music plays a major component in the movie. The original score was composed by Brian Flores of BREED Music (the same company that was part of the team that won the 2012 Oscar Winning Animated Short "The Fantastic Flying Books of Mr. Morris Lessmore." Songs from the movie come from bands: Semi Precious Weapons, Awolnation, Rebecca & Fiona, The M Machine, Innerpartysystem, A Giant Dog, the Hex Dispensers, Red Animal War, and Grammy Award Winning Producer John Congleton.


Retrieved from "https://movies.fandom.com/wiki/Bad_Kids_Go_to_Hell?oldid=74379"
Community content is available under CC-BY-SA unless otherwise noted.