Bad Times at the El Royale

View src
watch 01:33
House of the Dragon Trailer - The Loop
Do you like this video?
Play Sound
Bad Times at the El Royale 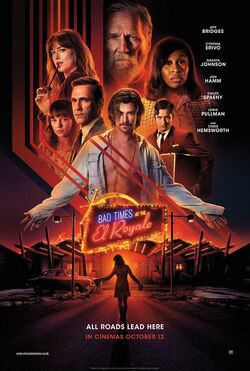 In 1959, a bank robber arrives at the El Royale hotel to bury a bag of money under the floor of one of the rooms. Unfortunately, he is shot dead by a fellow robber who searches the room, but cannot find the money.

Upon entering the honeymoon suite, Sullivan finds and removes several bugs from the room, only to discover a second set of bugs planted around the room and realizes that the dresser mirror is affixed to the wall. Upon searching, he discovers a hidden passage behind the rooms. The mirrors have one-way glass, and a movie camera is set up to film the guests' rooms.

Sullivan sees that Flynn is tearing open the floorboards in his room, Sweet is attempting to sing in solace, and Summerspring is holding a kidnapped woman hostage in her room. Sullivan himself is actually an FBI agent named Dwight Broadbeck, sent by the bureau to retrieve any evidence of their bugging operation in room 1. His superiors instruct him to retrieve any film that may contain footage of their operation, but not to interfere with the kidnapping.

Broadbeck sabotages the group's vehicles by pulling the distributor wiring, and against orders, he confronts Summerspring, and attempts to rescue the girl, who is revealed to be Summerspring's younger sister Rose.

Meanwhile, Flynn invites Sweet to join him for dinner. Unable to find Miles, they help themselves to a meal and chat. Flynn reveals he has memory problems and Sweet reveals that she is on her way to Reno for a singing job. Sweet sees Flynn attempting to drug her drink and knocks him unconscious with a wine bottle. Miles finds Flynn and inadvertently reveals to him about the film and the passageway. Miles explains that "management" tells him to film the guests and send footage to them but he decided to hold back one particularly incriminating film.

Fleeing the hotel, Sweet witnesses Summerspring open fire on Broadbeck. Summerspring realizes she has also injured Miles, who was watching through the mirror. Rose uses the commotion as a distraction and calls an unknown man, telling him the location of the hotel. Summerspring and Rose take Miles into the lobby and tie him up while Sweet retrieves her car cable. As Sweet tries to start her car, Flynn enters it and reveals that he is not actually a priest, but a bank robber. Flynn's real name is Dock O'Kelly, who was arrested after a botched robbery; his brother, Felix, was the robber who hid the money in the hotel and was killed. Recently freed, he has returned to the hotel under the guise of a priest to retrieve the money his brother left. However his memory problems caused him to forget which room the money was in and he has now deduced that the money is actually in Sweet's, and attempted to drug her to get into her room. In the lobby, it is revealed that Rose and Summerspring were in a cult, led by the charismatic and vicious Billy Lee. Summerspring was attempting to escape, and take Rose with her.

O'Kelly and Sweet agree to get the money, working together to distract a patrolling Summerspring while they do so. As they attempt to leave, Billy Lee and his cultists arrive to hold them hostage along with Summerspring and Miles. Rose is actually Lee's accomplice and resents her sister's "rescue". He interrogates the group about what has been happening, learning of the money and the film. Lee realizes that the film is worth much more than the money, as it can be used to blackmail the people who were filmed. Lee terrorizes the hostages, and shows his ruthlessness by killing Summerspring. Using a power outage to his advantage, O'Kelly attacks Lee, setting the hotel ablaze in the process. Miles reveals to Sweet that he is a former soldier who served in Vietnam. At Sweet's insistence, he picks up a gun and expertly kills Lee and the other cultists, only to be stabbed by a furious Rose. O'Kelly shoots and kills Rose but Miles, still traumatized and racked with guilt over his actions in Vietnam, begs O'Kelly to absolve him of his sins, which he does. Miles bleeds to death as O'Kelly and Sweet retrieve the money. Grabbing the film, and looking at each other, they toss it in the fire before fleeing the hotel.

Not long after, O'Kelly attends Sweet's show in Reno. The pair share a knowing look before Sweet performs for the crowd as O'Kelly proudly looks on.