Start a Wiki
watch 16:45
The Loop (Movies)
Do you like this video?
Badlands 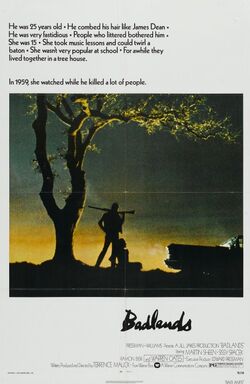 Directed By
Terrence Malick
Produced By


Jill Jakes (co-producer) (uncredited)
Narrated By
Sissy Spacek
Written By
Terrence Malick
Based on
The kill-spree of Charles Starkweather and Caril Ann Fugate from 1957 to 1958.
Cast

Badlands is a 1973 American period crime drama film written, produced, and directed by Terrence Malick in his filmmaking debut, starring Martin Sheen and Sissy Spacek, and featuring Warren Oates and Ramon Bieri. Malick has a small speaking part, although he does not receive an acting credit. The story, though fictional, is loosely based on the real-life murder spree of Charles Starkweather and his girlfriend, Caril Ann Fugate, in 1958, though such a basis was not acknowledged when the film was released.
In 1993, Badlands was selected for preservation in the National Film Registry by the Library of Congress as being "culturally, historically, or aesthetically significant."

The film is narrated by Holly (portrayed by Sissy Spacek), a teenage girl living in a dead-end small town in South Dakota. One day, she meets Kit (portrayed by Martin Sheen), a young greaser, who charms her and takes her as his accomplice on a cross-country killing spree. Holly's narration, describing her adventures with Kit with romantic clichés, is juxtaposed with the grim reality of Kit's sociopathic actions. The two are eventually arrested; Kit is executed for his crimes, while Holly receives probation.

Retrieved from "https://movies.fandom.com/wiki/Badlands?oldid=156685"
Community content is available under CC-BY-SA unless otherwise noted.