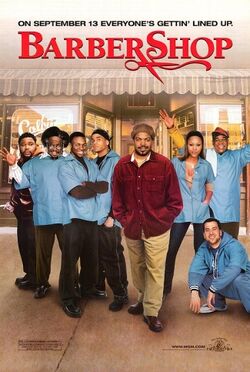 The barbershop is owned by Calvin (Ice Cube), who inherited it from his father. It scrapes by but doesn't feed his hunger for bigger things--like a recording studio, for example (he dreams of platinum records issuing from his basement). One day, heedlessly, he sells the shop for $20,000 to Lester the Loan Shark (Keith David), who promises the word "barbershop" will be permanently on the store, but privately has in mind a gentleman's club by the same name.

The barbers and regular customers are devastated by this news. The shop provides more than employment or service for them; it is community, forum, friendship, camaraderie, continuity. Realizing his error, Calvin tries to buy back the shop, but finds the price is now $40,000. So it appears this will be the last day that the little shop acts as a stage for all the regulars.

The barbers are perhaps too many to be supported by such a shop, but they provide a nice cross section: In addition to Calvin, there's old Eddie (Cedric the Entertainer), who never seems to have a customer but is installed as chief pontificator; Jimmy (Sean Patrick Thomas), a college student who tries to impress everyone with his knowledge (are scallops a mollusk?); Terri (Eve), who knows somebody has been drinking her apple juice from the refrigerator in the back room; Ricky (Michael Ealy), who has two strikes against him and will get life for a third; Dinka (Leonard Earl Howze), from Nigeria, who likes Terri but is too rotund for her tastes, and Isaac Rosenberg (Troy Garity), the token white barber, with a fine ass black girlfriend, an expensive car, who explains that, inside, he's blacker than some of the others.

A parallel plot involves JD (Anthony Anderson) and Billy (Lahmard Tate), who stage a spectacularly incompetent theft of an ATM machine that has been recently installed in the Indian grocery on the corner. Since they "borrowed" Ricky's van for this job, if they get caught he goes up for life. The unending conversation in the shop is intercut with JD and Billy wrestling with the ATM machine, which at one point they even attempt to check in with at a motel.

The film received positive reviews. Rotten Tomatoes gives the film a "Certified Fresh" rating and a score of 82% based on 124 reviews, with the critical consensus "Besides bringing on the laughs, Barbershop displays a big heart and demonstrates the value of community." Metacritic gives the film a weighted average score of 66% based on reviews from 29 critics.

A sequel Barbershop 2: Back in Business was released on February 6, 2004. In 2014, a third Barbershop film was announced titled Barbershop: The Next Cut and is scheduled to be released on April 15, 2016.