watch 00:59
The Loop (Movies)
Do you like this video?
Barbershop: The Next Cut 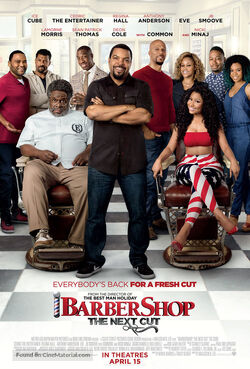 Barbershop: The Next Cut (formerly known as Barbershop 3) is a 2016 American comedy film directed by Malcolm D. Lee. It is the sequel to Barbershop 2: Back in Business and the fourth film in the Barbershop series after the spin-off Beauty Shop. It was released on April 15, 2016 by Warner Bros. Pictures.

To survive harsh economic times, Calvin (Ice Cube) and Angie (Regina Hall) have merged the barbershop and beauty salon into one business. The days of male bonding are gone as Eddie (Cedric the Entertainer) and the crew must now contend with sassy female co-workers and spirited clientele. As the battle of the sexes rages on, a different kind of conflict has taken over Chicago. Crime and gangs are on the rise, leaving Calvin worried about the fate of his son. Together, the friends come up with a bold plan to take back their beloved neighborhood.

Retrieved from "https://movies.fandom.com/wiki/Barbershop:_The_Next_Cut?oldid=101120"
Community content is available under CC-BY-SA unless otherwise noted.