watch 00:59
The Loop (Movies)
Do you like this video?
Barbershop: Back in Business 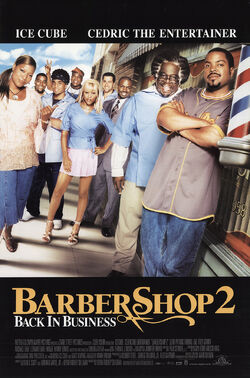 Barbershop 2: Back in Business is a 2004 American comedy-drama film directed by Kevin Rodney Sullivan. It is the sequel to Barbershop and the second installment in the Barbershop film series. It is starring Ice Cube, Cedric the Entertainer, Sean Patrick Thomas, Eve, and several other actors reprise their roles from the first Barbershop film. Tom Wright and Jazsmine Lewis return in smaller roles. It was released on February 6, 2004 by Metro-Goldwyn-Mayer.

The film also features Queen Latifah and later had a spin-off of the film Beauty Shop, which was released on March 30, 2005.

The film returns to a Chicago barbershop owned by Calvin Palmer Jr. (Ice Cube). His employees have their own personal and workplace problems, and a new barbershop called Nappy Cutz has moved in across the street. As Calvin tries to change the character of his business, Nappy Cutz and gentrification become a threat to the surrounding community.

Main article: Barbershop: The Next Cut''

On March 26, 2014, Deadline.com reported that MGM was in negotiations with Ice Cube to produce a third Barbershop film.

On March 19, 2015, MGM announced that the studio had been setting up deals with Cedric the Entertainer, Queen Latifah, and Nicki Minaj to appear in the film. Malcolm D. Lee was set to direct the film and New Line Cinema (via Warner Bros.). The film was released on April 15, 2016.

Retrieved from "https://movies.fandom.com/wiki/Barbershop_2:_Back_in_Business?oldid=161979"
Community content is available under CC-BY-SA unless otherwise noted.