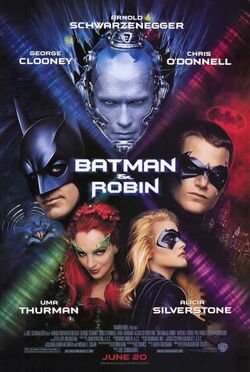 It serves as a sequel to the 1995 film Batman Forever and is the fourth entry in the initial Batman series of films. Clooney, who portrays Bruce Wayne / Batman in the film, replaces the character's previous actor Val Kilmer, who starred in Schumacher's aforementioned film.

Batman and his new partner, Robin, come into conflict in the form of a new foe, Mr. Freeze, who has left a string of diamond robberies in his wake. During a confrontation in the natural history museum, Freeze steals a bigger diamond and flees, freezing Robin and leaving Batman unable to pursue him. Later, Batman and Robin learn that Freeze was originally Dr. Victor Fries, a scientist working to develop a cure for MacGregor's syndrome to heal his terminally ill wife. After a lab accident, Fries was rendered unable to live at normal temperatures and forced to wear a cryogenic suit powered by diamonds in order to survive.

At a Wayne Enterprises lab in Brazil, botanist Dr. Pamela Isley is working under the deranged Dr. Jason Woodrue, experimenting with a drug called Venom. She witnesses Woodrue use the formula to turn serial killer Antonio Diego into a hulking monstrosity, whom he dubs "Bane". When Isley threatens to expose Woodrue's experiments, he attempts to kill her by overturning a shelf of various toxins. Isley transforms into the beautiful and seductive Poison Ivy before killing Woodrue with her poisonous kiss, setting fire to the lab, and escaping with Bane. She finds that Wayne Enterprises funded Woodrue, though they eventually cut Woodrue's funding. Poison Ivy concocts a plan to use Wayne's money to fund her research, and goes to Gotham City with Bane in tow. Meanwhile, Alfred Pennyworth's niece, Barbara Wilson, makes a surprise visit and is invited by Bruce to stay at Wayne Manor until she goes back to school.

Wayne Enterprises presents a new telescope for Gotham Observatory at a press conference interrupted by Isley. She proposes a project that could help the environment, but Bruce declines her offer, which would kill millions of people. That night, a charity event is held by Wayne Enterprises with special guests, Batman and Robin, and she decides to use her abilities to seduce them. Freeze crashes the party and steals a diamond from the event. Although he is captured by Batman and detained in Arkham Asylum, he eventually escapes with the help of Ivy, who kills two security guards with her kiss in the process. Meanwhile, Dick discovers that Barbara has participated in drag races to raise money for Alfred, who is dying of MacGregor's syndrome.

Batman and Robin begin to have relationship problems because of Ivy's seduction of Robin, but Bruce eventually convinces Dick to trust him. Ivy is then able to contact Robin once more; she kisses him but fails to kill him, as Robin is wearing rubber lips. Meanwhile, Barbara discovers the Batcave, where an AI version of Alfred reveals he has made Barbara her own suit. Barbara dons the suit and becomes Batgirl. Ivy captures Robin, Batman rescues him and Batgirl arrives and subdues Ivy, before revealing her identity to the pair.

Batman, Robin and Batgirl decide to go after Freeze together. By the time they find Freeze and Bane, however, Gotham is completely frozen. Batgirl and Robin are attacked by Bane, but they eventually defeat him by kicking apart his Venom tubes, stopping the flow of Venom to his body.

Meanwhile, Batman and Freeze begin to fight each other, with Batman defeating Freeze. Batgirl and Robin manage to thaw the city and Batman shows Freeze a recording of Ivy during her fight with Batgirl, who had informed the latter that she killed Freeze's wife. However, Batman informs Freeze that his wife is still alive, in cryogenic slumber before being moved to Arkham Asylum, waiting for Freeze to finish his research. Batman proceeds to ask Freeze for the cure he has created for the first stage of MacGregor's Syndrome to administer to Alfred, and Freeze atones for his crimes by giving him the medicine he had developed.

Ivy is imprisoned in Arkham Asylum, with a vengeful Freeze as her cellmate. Alfred is cured, and everyone agrees to let Barbara stay at Wayne Manor and fight crime with them.

Retrieved from "https://movies.fandom.com/wiki/Batman_%26_Robin_(1997)?oldid=301750"
Community content is available under CC-BY-SA unless otherwise noted.