Batman Beyond: Return of the Joker

Batman Beyond: Return of the Joker

Batman Beyond: Return of the Joker (also known as Batman of the Future: Return of the Joker in the United Kingdom and Australia) is a 2000 American direct-to-video superhero mystery animated film featuring the comic book superhero Batman and his archenemy, the Joker. It is set in the continuity of the animated series Batman Beyond, in which Bruce Wayne has retired from crime fighting, giving the mantle of Batman to high-school student Terry McGinnis, and serves as a sequel to both Batman: The Animated Series and The New Batman Adventures. As in the TV series, Will Friedle and Kevin Conroy star as Terry McGinnis and Bruce Wayne, respectively, and Mark Hamill, who voiced the Joker opposite Conroy in Batman: The Animated Series and The New Batman Adventures, reprises his role. Animation services were done at the Japanese animation studio, TMS Entertainment.

Before its release, the film was heavily edited to remove scenes of intense violence, and some dialogue was altered, thus creating the "Not-Rated" version of the film. The original version was subsequently released on DVD following an online petition to have the original version released. It received a PG-13 rating from the Motion Picture Association of America (MPAA) for violence, the first animated Batman film and from Warner Bros. Family Entertainment to do so.

Mephisto Odyssey and Static-X contributed the song "Crash (The Humble Brothers Remix)" on the film's soundtrack, along with a music video directed by Len Wiseman featured on the DVD.

In the year 2040, the Jokerz break into an industry to steal advanced technology. Batman intervenes but they escape. They soon return to their boss: A resurrected Joker. Bonk gets mad at Joker and the latter shoots Bonk with a bang flag, killing him, and terrifying the rest of the gang. Joker soon breaks into the Batcave, mortally wounds Ace and poisons Bruce Wayne. Terry McGinnis is soon aware of this and calls Barbara Gordon to help. Barbara then tells Terry about how the Joker died. It all went back to when Wayne was still Batman and shows Tim Drake AKA Robin stopping 2 crooks from attacking a woman. The woman was really Harley Quinn in disguise and knocks Robin out with a mallet. Joker then tortures him for 3 weeks then soon tells Batman where he is. Joker shows his nemesis the Joker Jr he created, enraging Batman so much that he threw a shiv he used to try and cut the rope he was tied in. The Joker ducked and a chase ensues. Joker tells Batman how he tortured Robin and turned him into a monster. Batman soon breaks through the glass and attacks Joker. Joker soon gains the upper hand by stabbing Batman in the leg. He then tells Robin to shoot Batman but instead shoots the Joker, killing him. Batman soon traces Joker to an old warehouse and fights him. The Joker stunned him by throwing a grenade at him. He then unmasks him and strangles him. Batman managed to grab Joker’s joy-buzzer and electrocutes him, destroying the microchip and killing the Joker for good.

The film was put in production after the cancellation of Boyd Kirkland's Batman: Arkham, the intended sequel to Batman & Mr. Freeze: SubZero, as well as the planned third Batman: The Animated Series feature film. It was produced during the second and third season of Batman Beyond, and aired as part of the third season, specifically after the episodes "King's Ransom" and "Untouchable", although in fact, the movie's events could have happened even after "Unmasked", the show's series finale, as there is no reference to the previous two mentioned episodes. Something interesting to note is that the show's recurring character Maxine "Max" Gibson is inexplicably absent from the film.

The design of the Joker in the film was the second revamp of physical appearance, after his redesign in The New Batman Adventures. This design was later used in the episodes "Injustice for All", "Only a Dream, Part 1" and "Wild Cards" of Justice League and in the episode "The Big Leagues" of Static Shock. According to the DVD commentary, Joker's new design was based on an illustration of Hannibal Lecter from the novel The Silence of the Lambs. The design of the character of Chucko was inspired in a clown costume of Eric Radomski, while the character of Ghoul's design was loosely based on The Scarecrow, one of Batman's original foes. The character of Woof was created as a tribute to Bud and Lou, the pet hyenas of The Joker in Batman: The Animated Series. Dee Dee's original designs were also very different to the final ones, resembling very much the classic disguise of her grandmother Harley Quinn.

Besides the main cast of the TV series (who returned to reprise their roles), the producers also cast Michael Rosenbaum, a voice actor that voiced many characters in Batman Beyond, as Ghoul, one of the Joker's Jokerz. The others were voiced by other DCAU voice actors. According to the DVD commentary, Rosenbaum modeled his voice on that of actor Christopher Walken. Rosenbaum's performance ended up leading the producers to gave him the role of The Flash in Justice League. Dean Stockwell was cast as an adult Tim Drake, being inspired by one of his earliest roles in The Boy with Green Hair when he was a child actor, while casting director Andrea Romano played young Tim when he was Joker Junior. Mark Hamill, apart of reprising his role as the Joker, also voiced Jordan Pryce, a red herring character, in the film, in order to deceive the public about the new Joker's true identity. Tara Strong, who voiced Barbara Gordon/Batgirl, was first credited as Tara Charendoff, her maiden name. For the scene of the old Harley Quinn, Bruce Timm originally wanted to cast an old actress for the role, but at the end, he decided to maintain Arleen Sorkin in the role.

In the early drafts of the film's script, Joker's sidekick Harley Quinn was originally set to be killed in the flashback sequence. However, a short scene near the end of the movie, just after the climax, features an older woman who resembles Harley releasing her twin granddaughters Dee Dee (Delia and Deidre Dennis) from prison. When the old woman scolds the twins about their actions, one of them replies: "Shut up, Nana Harley!" Producer and screenwriter Paul Dini included this scene in the script because of his displeasure at being asked to kill off what he felt was one of his biggest contributions to the Batman mythos. Producer Bruce Timm chose to retain it because he felt it provided some necessary comic relief. The Hyperion-class Satellite idea was taken from Katsuhiro Otomo's sci-fi film Akira. The Jolly Jack Candy Factory, the resurrected Joker's hideout, is a reference to American comic book artist Jack Kirby, who, during his early Marvel Comics days, was known as "Jolly" Jack Kirby.

Many scenes written in the film's original script, like one featuring The Penguin being interrogated by Batman at the Iceberg Lounge during the flashback sequence in order to discover the whereabouts of The Joker and Robin or one showing the Jokerz being arrested by Barbara Gordon and the Gotham City Police Department, were deleted due to time constraints. Woof even had a line in the original script, but it was cut. The scene in which Bruce listens records taken from The New Batman Adventures episode "Holiday Knights" was originally planned to retain the episode's animation, but at the end it was edited to replace the Joker's old appearance. Even although many scenes were deleted from the final cut, some planned scenes were storyboarded but never made. For example, it was originally intended that after being shot at the film's beginning, Bonk's corpse was to be seen in the background twitching throughout the rest of the scene, but the producers were asked to leave it out early in the film's development. Another deleted concept was that in the "Our Family Memories" video, Joker's apron was originally going to say "Kill the Cook", rather than the final's "Kiss the Cook", and the table was supposed to have surgical tools rather than the final's bagels, plungers, and cream cheese, but it was changed due being too gruesome. 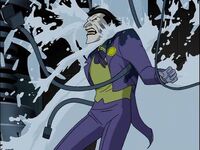 The Joker's death in the edited version of the film (Not-Rated).

The film was initially released amid the backlash against violence in films and video games aimed at children that followed the Columbine High School massacre, in which Eric Harris and Dylan Klebold killed 12 students and one teacher before committing suicide on April 20, 1999. As a result, the film was substantially re-edited shortly before release on December 12, 2000, to reduce the violence. The original unedited version was eventually released as "The Original Uncut Version" on April 23, 2002.

The following are scenes that were changed in the edited-for-content version:

Connections to the television series

Released on October 17, 2000, the soundtrack to Batman Beyond: Return of the Joker contains music composed by Kristopher Carter, as well as two tracks of music featured in the direct-to-video film.

All tracks written by Kristopher Carter.

All songs are written and composed by Kristopher Carter.

The film received critical acclaim for its story, voice acting, animation, and score. It holds an 88% rating on Rotten Tomatoes.

Nisha Gopalan of Entertainment Weekly praised the uncut version of the film, in particular how it "sheds light on the dark, obsessive relationship between the villain and his vigilante counterpart." Gerry Shamray of Sun Newspapers said that Return of the Joker "would have made a great live-action Batman movie." Ryan Cracknell of Apollo Guide called the film "an animated masterpiece."

Peter Canavese of Groucho Reviews called it an "energetic and unsettling Batman adventure," adding that it "provides a memorable showcase for Hamill's celebrated take on the Joker, and allows both McGinnis and Wayne to see action and face emotional challenges." Michael Stailey of DVD Verdict gave the uncut version a score of 92 out of 100, calling it "a taut, high-impact film" and "a must-buy to Bat-fans and animation lovers alike."

Garth Franklin of Dark Horizons had a mixed response when reviewing the uncut version, saying that "the script is pretty solid, the animation superb, and the voice performances all work well," but added that "the Terry character's personal scenes aren't anywhere near as engaging [as the scenes featuring the Joker or Bruce Wayne], and the investigative subplot doesn't work as well as it should." Jeremy Conrad of IGN gave the uncut version a score of nine out of 10 for the movie itself, six out of 10 each for video and audio, and eight out of 10 for extras, adding up to an overall score of seven out of 10.

The comic adaption of the film was released in February 2001. While the comic was largely uncensored, the page depicting the Joker's death was redone to match the censored version of the movie.

The comic includes several scenes that did not make it to either version of the film. Two examples are: