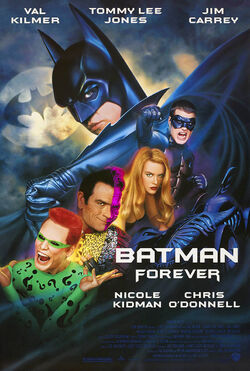 Batman Forever is a 1995 American superhero film directed by Joel Schumacher and is based on the DC Comics character Batman. The cast of the film consists of Val Kilmer, Tommy Lee Jones, Jim Carrey, Nicole Kidman, Chris O'Donnell, Michael Gough, and Pat Hingle.

It serves as a sequel to the 1992 film Batman Returns and is the third entry in the initial Batman series of films. Kilmer, who portrays Bruce Wayne / Batman in the film, replaces the character's previous actor Michael Keaton, who starred in Tim Burton's 1989 film Batman and its aforementioned sequel Batman Returns.

In Gotham City, the vigilante Batman defuses a hostage situation orchestrated by a criminal known as Two-Face—formerly district attorney Harvey Dent, who was disfigured with acid by mobster Sal Maroni, which Batman failed to prevent—but Two-Face escapes. Edward Nygma, an eccentric researcher at Wayne Enterprises, approaches his employer, Bruce Wayne—secretly Batman—with an invention that can beam television signals into a person's brain. Bruce rejects the device, concerned the technology could manipulate minds. After killing his supervisor and staging the death as a suicide, Nygma resigns and plots revenge against Bruce, obsessively sending him riddles; as a favor to Bruce, criminal psychologist Chase Meridian diagnoses that his stalker is psychotic.

Bruce invites Chase (who is obsessed with Batman) to a circus. Two-Face hijacks the event and threatens to detonate a bomb unless Batman surrenders himself. Acrobat Dick Grayson, the youngest member of the Flying Graysons, manages to throw the bomb into the river, but Two-Face kills his family. Bruce persuades the orphaned Dick to live at Wayne Manor as his ward, and Dick discovers Bruce is Batman. Taking the Batmobile for a joyride, Batman saves Dick from thugs; determined to avenge his family, Dick demands to join Batman in crime-fighting and kill Two-Face, but Bruce refuses.

Nygma, inspired by Two-Face's raid at the circus, adopts a criminal persona, the Riddler, and forms an alliance with Two-Face, promising to uncover Batman's identity. They commit a series of robberies to finance Nygma's new company and mass-produce his brainwave device, the “Box”, which secretly steals information from users’ minds. Nygma hosts a party where he goads Bruce into using the Box, before Two-Face unexpectedly arrives. As Batman, Bruce pursues Two-Face and is nearly killed, but is rescued by Dick.

Batman visits Chase, who explains gradually that she has fallen in love with Bruce. He invites her to the manor and reveals his secret identity, while Dick runs away after taking parts from one of Bruce's Batsuits. The Riddler and Two-Face, having discovered Bruce's secret through the Box, arrive and blow up the Batcave, shooting Bruce and kidnapping Chase. As Bruce recovers, he and his butler, Alfred, use the riddles to deduce that Nygma is the Riddler. Bruce dons a new Batsuit and Dick joins him as Batman's partner, Robin.

Batman and Robin reach Riddler and Two-Face's lair on Claw Island, where they are separated. Robin encounters Two-Face and nearly kills him, but spares his life and is captured. Batman confronts the Riddler, who reveals Chase and Robin trapped in containment tubes above a deadly drop, giving Batman the chance to save only one hostage. Instead, Batman destroys the Riddler's brainwave receiver with a Batarang, overwhelming the Riddler's mind and allowing Batman to rescue Robin and Chase. Two-Face corners the trio and determines their fate with the flip of a coin, but Batman throws a handful of identical coins in the air, causing Two-Face to stumble and fall to his death.

Committed in Arkham Asylum, Nygma claims to know Batman's secret identity and is visited by Chase, but it is revealed that the delusional Nygma now believes he is Batman. Chase tells Bruce that his secret is safe before parting ways, and Bruce resumes his crusade as Batman with Robin as his partner.