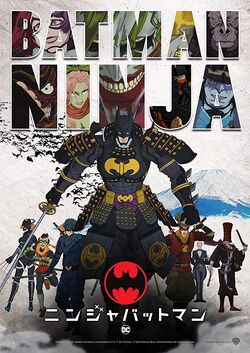 Batman Ninja (ニンジャバットマン Ninja Battoman) is a 2018 Japanese animated superhero film directed by Junpei Mizusaki and produced by Warner Bros., which features the DC Comics character Batman. Takashi Okazaki, the creator of Afro Samurai, is the character designer for the film. The first poster was revealed on October 5, 2017, and the trailers were released later on December 1, 2017. The film was released in the United States in digital format on April 24, 2018; it was released in physical formats on May 8 and was released theatrically in Japan on June 15. In its American release, writers Leo Chu and Eric Garcia have admitted to rewriting the film from the original Japanese script written by Kazuki Nakashima, ultimately making two entirely different versions of the same film.

While battling Gorilla Grodd at Arkham Asylum, Batman is caught in Grodd's Quake Engine time displacement machine and sent to Feudal Japan. There, he is chased by samurai working for the villainous Joker. During his escape, Batman meets up with Catwoman, who reveals everyone else arrived two years earlier (due to Batman being in the outermost area affected by the Quake Engine). He learns from her that all of Gotham City's top criminals have become feudal lords after deceiving the Sengoku daimyō, battling each other until only one state remains. In order to stop the villains from changing history, Batman and Catwoman must get to the Quake Engine in Arkham Castle (formerly the asylum). Batman discovers that Alfred Pennyworth is also in the past and has built a Batcave outside Edo.

When the Joker's troops ambush the hideout, Batman storms his way in his Batmobile towards Arkham Castle, which transforms into a giant robot fortress. Just as Batman confronts the Joker, he is forced to leave and save a mother and child below from being crushed by the robot's hand. He transforms his Batcycle into an armored suit to defeat a sumo Bane and stop the robot hand, only for the mother to reveal herself as Harley Quinn and knock him down. As Batman is surrounded by the Joker's minions, he is suddenly whisked away by ninjas led by Eian of the Bat Clan of Hida. He learns that the Bat Clan helped Nightwing, Red Hood, Robin, and Red Robin upon their arrival, and that the clan had followed a prophecy of a foreign bat ninja restoring order to the land. Robin gives Batman an invitation from Grodd to a nearby hot spring. There, Grodd explains that he intended to send the villains far away so he could take Gotham for himself, but Batman's interference sent them all to Feudal Japan instead. Batman and Grodd agree to work together to return to Gotham.

Batman, Grodd, Catwoman, the Bat Family, and the Bat Clan battle the Joker and his forces by the river. They defeat the Joker and Harley, but Grodd turns on Batman, revealing his alliance with Two-Face before the Joker and Harley escape and blow up their own ship, taking Batman down with it. Having captured a power converter from Harley, Catwoman attempts to bargain with Grodd in bringing her back to Gotham; however, they need to obtain other power converters from Penguin, Poison Ivy, and Deathstroke to complete the Quake Engine.

Two days later, Batman recovers from his wounds and encourages the Bat Family to learn the ways of the ninja in order to defeat Grodd. Red Hood locates the Joker and Harley, but Batman discovers that they lost their memories from the explosion and are living their lives as farmers. A month later, the Gotham villains mobilize their castle robots for battle at Jigokukohara, the field of Hell. Batman leads the Bat Family and the Bat Clan into the battlefield. After defeating the other villains, Grodd puts them under his mind control, with the intent of ruling the country himself. The Joker and Harley, however, crash his party from above, reclaiming their castle from Grodd. The Bat Family saves Catwoman and Grodd before the Joker merges all of the castles into the super robot Lord Joker. An injured Grodd gives Batman control of his army of monkeys; Robin enables them to merge into one giant samurai monkey to battle the Joker's robot. The samurai monkey then combines with a swarm of bats to form the Batgod to defeat Lord Joker before the Bat Family storm into the castle to battle the villains. The Joker reveals to Batman that as farmers, he and Harley planted special flowers that triggered their memories back once they bloomed. As the castle falls, Batman and the Joker engage in a sword fight. Using his ninjutsu skills, Batman defeats the Joker.

With the Joker and the Gotham villains defeated, Feudal Japan is restored to its original state and the Bat Family take the villains back to the present day. In a mid-credits sequence, Catwoman sells weapons and furniture from the castle robots to an antique shop while Bruce rides a horse-driven Batmobile to a party hosted by the mayor.

The Nendoroid figures of Pop Team Epic characters Popuko and Pipimi, dressed as Batman and Joker respectively, were displayed at the Warner Bros. booth at AnimeJapan 2018. It was suggested by Junpei Mizusaki at Kamikaze Douga; the studio animated both this film and Pop Team Epic television series. The crossover figures were accompanied by a 15-second TV commercial, where Popuko and Pipimi (in the aforementioned costumes) re-enact a sketch from Pop Team Epic comics before it jumps to a Batman Ninja scene.

On review aggregator website Rotten Tomatoes, the film received an approval rating of 80% based on 15 reviews, with an average rating of 6.5/10.

IGN awarded Batman Ninja a score of 9.7 out of 10, saying, "DC tried something new by bringing in visionary Japanese animators to offer a refreshing take on one of the company's most beloved characters, and the finished product not only built upon the great adaptations that have come before, but surpassed them."

Retrieved from "https://movies.fandom.com/wiki/Batman_Ninja?oldid=164557"
Community content is available under CC-BY-SA unless otherwise noted.