Battle for the Planet of the Apes

Edit
watch 01:23
Wiki Targeted (Entertainment)
Do you like this video?
Play Sound
Battle for the Planet of the Apes 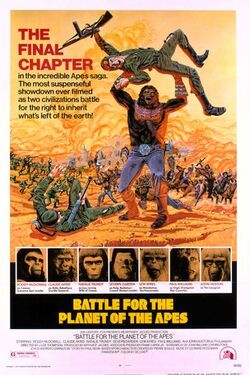 Ten years after conquering the Earth, ape leader Caesar (Roddy McDowall) wants the ruling apes and enslaved humans to live in peace. But warring factions of apes led by a militant gorilla general as well as various human groups threaten the stability.

Set in a flashback in the former North American continent of the early 21st century in the year 2003, and told by the Great Lawgiver, this latest Planet of the Apes sequel focuses on the chimpanzee ape leader, Caesar (Roddy McDowall), more then a decade after he led the ape revolution in the previous film. In this post-nuclear war society, Caesar tries to cultivate peace between his simian peers and the surviving remains of humanity. A militant gorilla general named Aldo (Claude Akins) however opposes this. Therefore, he plots Caesar's overthrow and doom. Caesar is now married to the chimpanzee Lisa (Natalie Trundy), the female chimpanzee ape of the previous film, and they have a son, named Cornelius (Bobby Porter) in honor of Caesar's late father.

Caesar regrets having never known his parents until his human assistant MacDonald (Austin Stoker) informs him that by viewing video taped archives of his parents, he can learn about the future. Caesar learns the archives are in the Forbidden City, once the city in which Caesar was enslaved, and is now in nuclear ruins.

After obtaining weapons from an armory run by the orangutan Mandemus (Lew Ayres), Caesar travels with MacDonald and the orangutan Virgil (Paul Williams) to the Forbidden City and sneaks in to find the recorded archives. However, there are radiation-scarred humans still living in the Forbidden City, now under the command of Governor Kolp (Severn Darden), the former police chief under the late Governor Beck and who is now the current leader and governor. Caesar and his party view the video recordings of Cornelius and Zira (from 'Escape from the Planet of the Apes') and learn about the future of the world, but barely have enough time to study the tapes before they must escape or risk capture or death.

Back in Ape City, Caesar assembles a meeting with the citizens to report his discoveries at the Forbidden City. Aldo objects when some humans show up at the meeting and leads the gorillas away.

The three-man scout group sent by Governor Kolp return and tell them about the Ape City. Kolp considers this clandestine entrance by Caesar an act of espionage while his subordinate Méndez (Paul Stevens) says that they did nothing wrong and should be allowed to go in peace. Governor Kolp then declares war on Ape City, mustering the mutant humans from the Forbidden City to destroy the ape society once and for all.

That night, Aldo is furious over the fact that Caesar wants to co-exist peacefully with humans and plots a military coup in order to install himself as the leader of Ape City. Cornelius (while climbing a tree) overhears this when trying to catch his pet squirrel, but is spotted by Aldo who hacks at the branch with his sword causing Cornelius to fall to the ground and suffer serious injuries and he becomes bedridden. After one of the ape scouts is wounded by Governor Kolp, Aldo takes action into his own hands and orders all humans rounded into the corral. Then, Aldo leads the gorillas to loot Mandemus' armory for its weapons.

Cornelius succumbs to his wounds leaving Caesar devastated. Upon learning about Aldo's actions from Virgil, Caesar leaves Cornelius's side to confront Aldo, but Kolp's ragtag force of mutant humans launches their attack against Ape City at that moment delaying Caesar's and Aldo's confrontation until after the battle as both Caesar and Aldo are forced to team up to fight the attacking mutant humans.

The mutants attack on Ape City initially succeeds after an artillery barrage destroys or damages many homes and buildings, forcing Caesar to order the defenders to fall back. When Kolp finds Caesar lying wounded amongst the apes on the ground, he taunts him saying the apes would once again be humanity's slaves or die, and is about to shoot him. But then Lisa cries out, and Kolp is distracted. Caesar shouts, "Now, fight like apes!," and most of the fallen apes all around them, who were feigning death (clearly on Caesar's orders) or hiding, launch a counter-attack that captures most of the mutants and drives Kolp into retreat. Kolp and his remaining forces are killed by Aldo and his mounted troops.

After the battle, Aldo wants to kill the humans in the pen, but Caesar shields them for they were not part of Kolp's army and thus killed nobody. Aldo declares that Caesar should be killed if he shields the humans. But before he can carry this out, he lets it slip that Cornelius' death was not due to an accident, but Aldo's malevolence. The ape community immediately grows angry and concludes that the society's sacred law ("ape must never kill ape") has been broken. As the community repeats "ape has killed ape!", an infuriated Caesar pursues Aldo up a large tree, and their fight results in Aldo's death when he falls. Caesar then goes to free the humans, but they refuse to leave the pen unless things change. MacDonald insists that freedom is meaningless without being treated as equals. Caesar then realizes the apes are just as evil and despicable as the former slave-owners if they treat the humans as second class citizens. The apes and humans then decide to co-exist with one another and begin to work side-by-side in rebuilding their community and make a new society.

In the final scene, the wizened orangutan teacher at the beginning of the film, known in ape society as the Great Lawgiver (John Huston), finishes the narration begun in the prologue all about the life of the late great chimpanzee leader Caesar who united the world in peace to a mixed group of young human and ape children in an outdoor classroom. The setting is now in the year 2670, over 600 years in the future. In complete contrast to the first 'Planet of the Apes' movie, instead of humanity falling and apes rising to take their place as the dominant species on Earth, the two species have continued to co-exist. When asked by a human child at what the future will hold and if man and ape will continue to live together in peace (among the next 1,300 years before the first 'Planet of the Apes' movie thus bringing the series full circle), the Lawgiver states that only the dead know about the future. The final shot zooms over to a life-size stone statue of Caesar and shows a single tear falling from the statue's left eye.