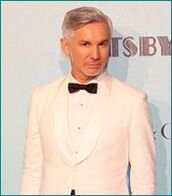 Baz Luhrmann is an Australian director, producer and screenwriter. He has also done some acting, although he is far better known for his directing. He famously directed William Shakespeare's Romeo and Juliet, which starred Claire Danes and Leonardo DiCaprio. This film won "Best Direction" and "Best Screenplay" at the BAFTAs, beating the box office hit Titanic. He also directed Moulin Rouge! which starred Nicole Kidman. Recently, he directed the film, Australia, which also stars Nicole Kidman and Hugh Jackman. The film was highly successful in Europe, although not very popular in the United States.

Retrieved from "https://movies.fandom.com/wiki/Baz_Luhrmann?oldid=71418"
Community content is available under CC-BY-SA unless otherwise noted.