watch 00:59
The Loop (Movies)
Do you like this video?
Beauty Shop 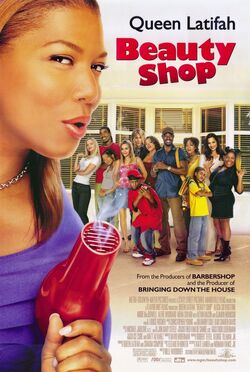 Beauty Shop is a 2005 American comedy film directed by Bille Woodruff. The film serves as both a third installment and a spin-off of the Barbershop franchise. It stars Queen Latifah as Gina, who was first introduced in Barbershop 2: Back in Business. This film also stars Alicia Silverstone, Andie MacDowell, Mena Suvari, Kevin Bacon and Djimon Hounsou.

Far from Chicago, hairdresser Gina Norris (Queen Latifah) has relocated to Atlanta with her daughter (Paige Hurd) and has quickly established herself as a rare talent in her profession. But after repeatedly butting heads with her shady, over-the-top boss, Jorge (Kevin Bacon), Norris sets out to create her own salon, even snagging a few of Jorge's employees and clients, including Lynn (Alicia Silverstone) and Terri (Andie MacDowell), respectively. Now, Jorge will do anything to shut her down.

Retrieved from "https://movies.fandom.com/wiki/Beauty_Shop?oldid=96496"
Community content is available under CC-BY-SA unless otherwise noted.