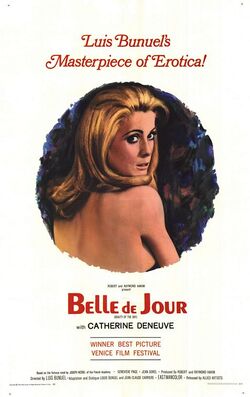 Belle de Jour is a 1967 French drama film directed by Luis Buñuel and starring Catherine Deneuve, Jean Sorel, and Michel Piccoli. Based on the 1928 novel Belle de jour by Joseph Kessel, the film is about a young woman who is compelled to spend her midweek afternoons as a prostitute while her husband is at work. The title refers to the French name of the day lily (Hemerocallis), meaning "beauty of [the] day", a flower that blooms only during the day.

It was Buñuel's first color film, most successful, and became his most famous surrealistic 'classic'. American director Martin Scorsese promoted a 1995 limited re-release in America and a 2002 release on DVD. In 2006 the Portuguese director, Manoel de Oliveira released Belle Toujours, imagining a future encounter between two of the central characters from the original film. In 2010, the film was ranked #56 in Empire magazine's list, The 100 Best Films of World Cinema. Belle de Jour won the Golden Lion and the Pasinetti Award for Best Film at the Venice Film Festival in 1967. Many of Deneuve's costumes were designed by Yves St. Laurent.

Séverine Serizy (Catherine Deneuve), a young and beautiful housewife, is unable to share physical intimacy with her husband, Dr. Pierre Serizy (Jean Sorel), despite their love for each other. Her sexual life is restricted to elaborate fantasies involving domination, sadomasochism, and bondage. Although frustrated by his wife's frigidity toward him, he respects her wishes.

While visiting a ski resort, they meet two friends, Henri Husson (Michel Piccoli) and Renée (Macha Méril). Séverine does not like Husson's manner and the way he looks at her. Back in Paris, Séverine meets up with Renée and learns that a mutual friend, Henriette, now works at a brothel. At her home, Séverine receives roses from Husson and is unsettled by the gesture. At the tennis courts, she meets Husson and they discuss Henriette and houses of pleasure. Husson mentions a high-class brothel to Séverine at 11 Cité Jean de Saumur. He also confesses his desire for her, but Séverine rejects his advances.

Haunted by childhood memories involving her father, Séverine goes to the high-class brothel, which is run by Madame Anaïs (Geneviève Page). That afternoon Séverine services her first client. Reluctant at first, she responds to the "firm hand" of Madame Anaïs, who names her 'Belle de Jour', and has sex with the stranger. After staying away for a week, Séverine returns to the brothel and begins working from two to five o'clock each day, returning to her unsuspecting husband in the evenings. One day Husson comes to visit her at home, but Séverine refuses to see him. Still she fantasizes about having sex with him in her husband's presence. Ironically, Séverine's physical relationship with her husband is improving and she begins sleeping with him.

Séverine becomes involved with a young gangster, Marcel (Pierre Clémenti), who offers her the kind of thrills and excitement of her fantasies. When Marcel becomes increasingly jealous and demanding, Séverine decides to leave the brothel, with Madame Anaïs' agreement. Séverine is also concerned about Husson who knows about her secret life at the brothel. One of Marcel's gangster associates follows Séverine to her home, and soon Marcel visits her and threatens to reveal her secret life to her husband. Séverine pleads with him to leave her home, and after some time he does.

Marcel waits downstairs for Pierre to return home and shoots him three times before escaping. He is eventually tracked down and shot dead by the police. Séverine's husband survives, but is left in a coma. The police are unable to find a motive for the attempted murder. Sometime later Séverine is at home taking care of Pierre who is now completely paralyzed and in a wheelchair. Husson visits him and tells Pierre the truth about his wife's secret life; she does not try to stop him. Afterwards, Séverine dreams that her husband is healthy again and they are happy.

Retrieved from "https://movies.fandom.com/wiki/Belle_de_Jour?oldid=133396"
Community content is available under CC-BY-SA unless otherwise noted.