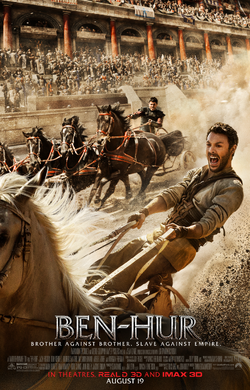 Ben-Hur is a 2016 American historical epic directed by Timur Bekmambetov, written by Keith R. Clarke and John Ridley, and starring Jack Huston, Morgan Freeman, Toby Kebbell, Nazanin Boniadi and Rodrigo Santoro. It is based on the 1880 novel Ben-Hur: A Tale of the Christ by Lew Wallace. Prior film adaptations of the book include the 1925 and the 1959 films of same name. the film was released in North American theaters on August 19, 2016 in 2D, 3D and Digital 3D.

Judah Ben-Hur (Jack Huston) loses everything after his adopted brother Messala (Toby Kebbell), now an officer in the Roman army, returns to Jerusalem and accuses the young prince of treason. Stripped of his title and separated from his wife (Nazanin Boniadi) and family, Ben-Hur must endure years of slavery on a galley at sea. When fate brings the estranged brothers to an epic and deadly chariot race, Ben-Hur finally gets the chance to exact vengeance on the man who destroyed his life.

Principal photography began on February 2, 2015 in Rome, Italy and lasted for about 6 months finishing in August 2015.

Ben-Hur has received generally negative reviews from critics. On the review aggregation website Rotten Tomatoes, the film has an approval rating of 31%, based on 98 reviews, with an average rating of 5.1/10. The site's critical consensus reads, "How do you fight an idea? By filming a remake that has too few of its own, and tries to cover it up with choppy editing and CGI." Metacritic, which uses a normalized rating, gives the film a score of 37 out of 100, based on 28 critics, indicating "generally unfavorable reviews". On CinemaScore, audiences gave the film an average grade of "A–" on an A+ to F scale. 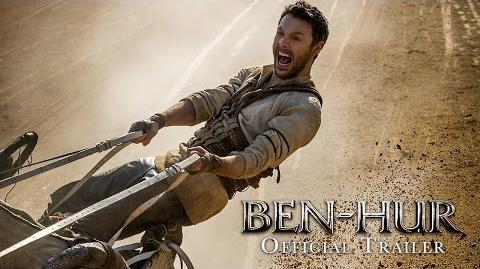 Retrieved from "https://movies.fandom.com/wiki/Ben-Hur_(2016)?oldid=120680"
Community content is available under CC-BY-SA unless otherwise noted.