Start a Wiki
watch 01:48
The Loop (Movies)
Do you like this video?
Beowulf 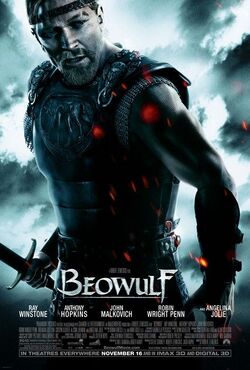 Beowulf is a 2007 American fantasy adventure movie directed by Robert Zemeckis. The film was made using the motion capture process similar to that which had been used in Zemeckis' earlier movie The Polar Express while using live-action. The screenplay by Neil Gaiman and Roger Avery is based on the anonymous Anglo-Saxon epic poem of the same name.

Years before, King Hrothgar had slain the dragon Fafnir and brought back a golden dragon drinking cup. In Denmark, a demon-monster named Grendel has been raiding and killing vikings in the drinking hall of King Hrothgar. Beowulf vows to kill the monster. When Grendel raids the hall, Beowulf tears the monster's arm off and drives it away. Beowulf finds that he must kill Grendel's mother, a demon spirit who had birthed Grendel after a tryst with Hrothgar. (It is impiled that Fafnir had also been born from Grendel's mother). After Grendel's mother kills Beowulf's vikings in revenge for her son's death, Beowulf goes in search of her. He tries to slay her-but as a demon/spirit she cannot be killed with a sword. She seduces him with the promise that in return for giving her a son, he will reign as King; as a pledge he leaves her the golden drinking horn. Beowulf then tells of how he killed Grendel's mother. Hrothgar leaves his kingdom and wife to Beoeulf as his heir as he has none since his wife refuses to give him children as a result of his tryst. Hrothgar then commits suicide; his remains are consumed by demon fire in the sea.

After many years Beowulf is king but has no heirs by either wife Wealtheow or mistress. Like Hrothgar, his tryst has left him sterile. A fire breathing dragon ravages the kingdom with a message to Beowulf: the sins of the father have come back. When Beowulf sees the golden drinking cup has been found and taken, he realizes the pact has been broken. He gives the cup to Grendel's mother to renew the pact, but it is too late. In a battle, Beowulf tears the dragon's heart out but is mortally wounded. With his dying breath, he tries to make right the legend—the dragon/demon is his son. Without heirs, Beowulf names his faithful retainer Wiglaf as King. As his ship funeral pyre is consumed by flames at sea, Beowulf is kissed by the demon spirit. Wiglaf finds the golden drinking horn and sees the demon spirit as a seductive woman. It is unknown if he will try to slay her or if he will be seduced as Hrothgar and Beowulf were and will father a demon monster that will ravenge the land...

Retrieved from "https://movies.fandom.com/wiki/Beowulf_(2007)?oldid=140738"
Community content is available under CC-BY-SA unless otherwise noted.