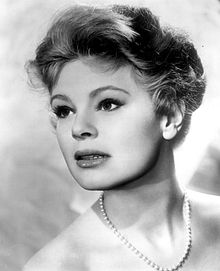 Betsy Palmer (born Patricia Betsy Hrunek on November 1, 1926 - May 29, 2015) was an American actress, known as a regular supporting movie and Broadway actress and television guest star, as a panelist on the game show I've Got a Secret, and later for playing the murderous serial killer mother, Pamela Voorhees in the popular slasher film Friday the 13th.

Write the second section of your page here.

In 1954, Palmer met and married obstetrician-gynecologist Dr. Vincent J. Merendino, M.D.. After 17 years of marriage, they got a divorce in 1971. They had one child.

Retrieved from "https://movies.fandom.com/wiki/Betsy_Palmer?oldid=123588"
Community content is available under CC-BY-SA unless otherwise noted.