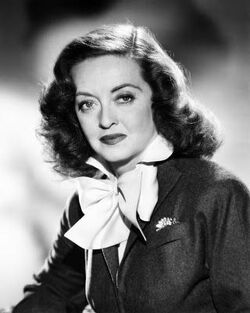 Ruth Elizabeth "Bette" Davis (April 5, 1908 – October 6, 1989) was an American actress of film, television and theater. Regarded as one of the greatest actresses in Hollywood history. She is known in such films as All About Eve, The Star and What Ever Happened to Baby Jane?.

Ruth Elizabeth Davis was born April 5, 1908, in Lowell, Massachusetts, to Ruth Augusta (Favor) and Harlow Morrell Davis, a patent attorney. Her parents divorced when she was 10. She and her sister were raised by their mother. Her early interest was dance. To Bette, dancers led a glamorous life, but then she discovered the stage, and gave up dancing for acting. To her, it presented much more of a challenge.

Retrieved from "https://movies.fandom.com/wiki/Bette_Davis?oldid=154994"
Community content is available under CC-BY-SA unless otherwise noted.