Start a Wiki
watch 01:27
The Loop (Movies)
Do you like this video?
Big Mommas House 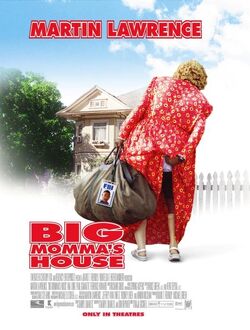 FBI agent Malcolm Turner (Martin Lawrence) is known best for being a brilliant, master of disguise. Malcolm's latest assignment sends him to small-town Georgia, where he's assigned to trap a brutal bank robber who is a recent prison escapee (Terrence Howard) who they suspect will be coming down to visit his ex-girlfriend Sherry (Nia Long) and her son. Malcolm sets up a stakeout across from the home of a larger-than-life southern matriarch known as Big Momma, who's about to be visited by Sherry. It's a simple plan, but there's one big problem: Unbeknownst to Sherry, Big Momma has unexpectedly left town. So Malcolm, decides to impersonate the cantankerous Southern granny. Using a few tricks of disguise, he completely transforms himself into Big Momma, even taking on the corpulent septuagenarian's everyday routine-from cooking soul food to delivering babies to "testifying" at the local church. In the mean time, Malcolm starts falling for Sherry, who may or may not be hiding some stolen cash. Now, Malcolm must somehow find a way to nab his criminal and protect Sherry.

Big Momma's House received generally negative reviews at the time of its release. It has a rating of 4.4/10 at Rotten Tomatoes, with 30% of 81 reviews being positive. The critical consensus was that "Big Momma's House is funny in some parts, but it is essentially a one-joke movie." Metacritic gives the film a score of 33% based on reviews from 27 critics, indicating "generally unfavorable reviews".

Retrieved from "https://movies.fandom.com/wiki/Big_Momma%27s_House?oldid=131462"
Community content is available under CC-BY-SA unless otherwise noted.