View src
watch 02:07
Spider-Man: No Way Home Trailer Dropped - The Loop
Do you like this video?
Play Sound
Bill Condon 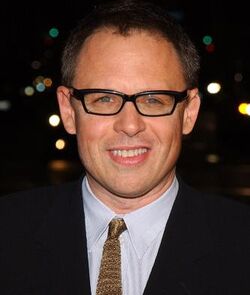 William "Bill" Condon is an American screenwriter and director. Condon is best known for directing and writing the critically acclaimed films Gods and Monsters, Chicago, Kinsey, Dreamgirls and the two final installments of the Twilight series, The Twilight Saga: Breaking Dawn Part 1 and The Twilight Saga: Breaking Dawn Part 2. In 1998, Condon debuted as a screenwriter with Gods and Monsters, which won him his first Academy Award. He was also nominated for Chicago. In 2006, Condon won a Golden Globe for his film Dreamgirls, which he wrote and directed. Condon's films have been both commercial and critical successes.

At the age of twelve, Condon found himself drawn to screenplay writing with his first viewing of Bonnie and Clyde: "Part of the pleasure of it was a completely instinctual thing that drew me into the world of writing about movies. Suddenly it became all of your senses—your mind was engaged by it. The most pleasurable thing was that you felt as if you were part of the movement and part of that fun."

After earning his Bachelor of Arts degree, Condon began to work as a journalist for film magazines including American Film and Millimeter. He got his start writing the indie feature Strange Behavior (1981) and the big budget sci-fi romp Strange Invaders (1983) starring Nancy Allen and Wallace Shawn. His directorial debut was Sister, Sister (1987), an eerie Southern Gothic mystery starring Eric Stoltz and Jennifer Jason Leigh. Following this, Condon made a series of made-for-TV thrillers, including Murder 101 (1991), which starred Pierce Brosnan and earned Condon and co-writer Roy Johansen a 1992 Edgar Award for their screenplay. During this period he also wrote the screenplay for the thriller F/X2 (1991), which was directed by Australian director Richard Franklin.

In 1994, he re-teamed with Nancy Allen to direct the movie of the week The Man Who Wouldn't Die, which also starred Roger Moore. After directing Candyman: Farewell to the Flesh (1995), a sequel to Bernard Rose's horror film, Condon came to prominence with his film Gods and Monsters, which he both wrote and directed. The screenplay was based on a novel written by Christopher Bram. For his efforts, he won the Academy Award for Best Adapted Screenplay. He would also be nominated for the same award for the Oscar-winning 2002 adaptation of the musical Chicago, which also brought him a second Edgar Award.

He received further accolades in 2004 for writing and directing the film Kinsey, chronicling the life of the controversial sex researcher Alfred Kinsey. In 2005, he was given the Stephen F. Kolzak Award at the GLAAD Media Awards. In 2005, it was announced that Condon would write the screenplay for, and direct, the film adaptation of Dreamgirls, the acclaimed Broadway musical loosely based on the career of the musical group The Supremes with Motown Records. It was his second adaptation of a musical. The production was filmed at CBS Studios in Los Angeles, with a cast including Jamie Foxx, Eddie Murphy, Beyoncé Knowles, Jennifer Hudson, Anika Noni Rose, and Danny Glover. Dreamgirls was released in December 2006, having finished shooting in April. Condon received Directors Guild of America and Broadcast Film Critics Association nominations for Directing but while the film led the nominations count with eight, neither Condon nor the film received nominations in their categories at the Academy Awards.

Condon is a member of the Independent Feature Projects (IFP) in Los Angeles, a non-profit organization which supports independent films, as well as the Independent Writers Steering Committee, which was initiated by the Writers Guild of America (WGA). He gained a lot of attention in 2010 when it was announced that he would direct both parts of The Twilight Saga: Breaking Dawn adapted from the fourth and final novel in The Twilight Saga by Stephenie Meyer.