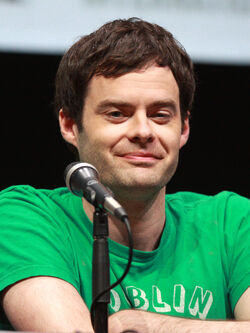 Name
William Thomas Hader Jr.
Birthplace
Tulsa, Oklahoma
Birth date
June 7, 1978
Occupation
Actor, voice actor, comedian, writer
Active Years
2004-present
William Thomas Hader Jr. (born June 7, 1978) is an American actor and comedian. Best known for his time on Saturday Night Live from 2005 to 2013, Hader has done numerous films such as The Skeleton Twins, Cloudy with a Chance of Meatballs and its sequel, Inside Out, Men in Black 3, and Superbad.

Hader was born and raised in Tulsa, Oklahoma, the son of Sherri Renee (née Patton) and William Thomas Hader. His father owned an air-freight company and worked as a restaurant manager, truck driver and occasional stand-up comedian. His mother was a dance teacher. He has two younger sisters, Katie and Kara. His ancestry includes German, Danish, Irish, and English; his surname originates in Germany.

Hader attended Patrick Henry Elementary School, Edison Junior High, and Cascia Hall Preparatory School. He had "a hard time focusing on class" and was always "joking around". Though he was not hated by classmates, he felt he never truly fit in and filled his time watching movies and reading. He appreciated Monty Python, British comedy, and the films of Mel Brooks and Woody Allen, many of which he was introduced to through his father. He made short films with friends and starred in a school production of The Glass Menagerie.

He was unable to gain admission to top film schools because of his "abysmal" grades, so he instead enrolled at The Art Institute of Phoenix, and later Scottsdale Community College. He worked as an usher at a movie theater in nearby Tempe, which allowed him to see films for free. He was fired for spoiling the ending of the 1997 film Titanic to noisy patrons. At Scottsdale, he met Nicholas Jasenovec, the director of Paper Heart.

Retrieved from "https://movies.fandom.com/wiki/Bill_Hader?oldid=139005"
Community content is available under CC-BY-SA unless otherwise noted.