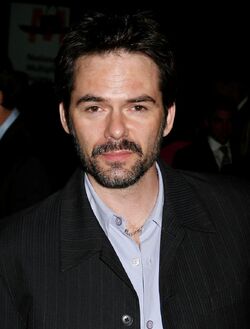 Burke was born in Bellingham, Washington. He is married to actress Pollyanna Rose; they have a daughter named Bluesy LaRue Burke.

His television credits include roles in Star Trek: Deep Space Nine (in the episode "Second Skin"), Party of Five, Gilmore Girls, Karen Sisco, Fringe, Monk and The Closer (Season 4, episode 13, "Power of Attorney" playing an attorney, who was a rapist and murder suspect, Phillip Stroh). He played Detective Eric Box in the film Untraceable.

His motion picture credits include Jane Austen's Mafia!, Along Came a Spider, Final Jeopardy, Flashpoint and Ladder 49. He appeared in Feast of Love (2007), co-starring Selma Blair and Morgan Freeman.

In 2008, Burke appeared in Twilight, based on the best-selling novel by Stephenie Meyer, playing the role of Charlie Swan. He also portrayed Bobby's brother Jack on the TV show My Boys. Burke reprised his role as Charlie Swan in Twilight's sequels, New Moon and Eclipse.

Burke is one of the "famous faces" on the online poker website Hollywood Poker, which is run in conjunction with Ongame Network. In February 2010, Burke was cast as Jonah King, the primary antagonist featured in the thriller Drive Angry, which was directed by Patrick Lussier and co-starred Amber Heard, Nicolas Cage, and William Fichtner. It was released on February 25, 2011.

As of July 2010, Burke appears in the TNT drama series Rizzoli & Isles.In 2012, he was cast as the lead in the NBC science-fiction series Revolution, created by Eric Kripke and produced by J. J. Abrams. Burke has the same last name (Matheson) in both 24 and Revolution.

Burke reprised his role in The Closer (Season 7, episode 16, "Hostile Witness" playing the rapist and murderer, attorney Phillip Stroh). He appeared again in the final season's finale in a face-off against the LAPD.

Retrieved from "https://movies.fandom.com/wiki/Billy_Burke?oldid=49316"
Community content is available under CC-BY-SA unless otherwise noted.