Start a Wiki
watch 01:38
The Loop (Movies)
Do you like this video?
Billy Elliot 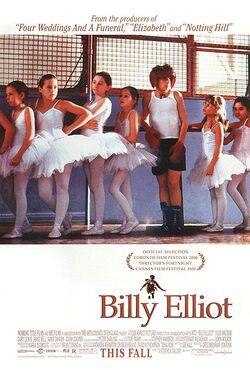 Billy Elliot is a British dance-drama film released by Universal pictures. The film cast consist of Jamie Bell, Julia Walters, Gary Lewis, and Jamie Draven. It was releases on 29 September 2000 in United Kingdom.

A talented young boy becomes torn between his unexpected love of dance and the disintegration of his family.

Retrieved from "https://movies.fandom.com/wiki/Billy_Elliot?oldid=163325"
Community content is available under CC-BY-SA unless otherwise noted.