watch 00:59
The Loop (Movies)
Do you like this video?
Birds of Prey (and the Fantabulous Emancipation of One Harley Quinn) 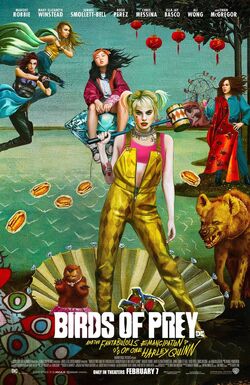 Birds of Prey (and the Fantabulous Emancipation of One Harley Quinn) (also known as Birds of Prey and later marketed as Harley Quinn: Birds of Prey) is a 2020 American superhero film based on the DC Comics team Birds of Prey. The film is intended to be the eighth film in the DC Extended Universe (DCEU) and a follow-up spin-off to the 2016 film Suicide Squad, and is directed by Cathy Yan and written by Christina Hodson. Birds of Prey stars Margot Robbie, Mary Elizabeth Winstead, Jurnee Smollett-Bell, Rosie Perez, Chris Messina, Ella Jay Basco, Ali Wong, and Ewan McGregor, and follows Harley Quinn as she joins forces with Black Canary, Helena Bertinelli, and Renee Montoya to save Cassandra Cain from Gotham City crime lord Black Mask.

Robbie, who also serves as producer, pitched the idea for Birds of Prey to Warner Bros. Pictures in 2015. The film was announced in May 2016; Hodson was hired to write the script that November, while Yan signed on to direct in April 2018. The majority of the cast and crew were confirmed by December 2018. Principal photography lasted from January to April 2019 and took place in Downtown Los Angeles, parts of the Arts District, Los Angeles, and soundstages at Warner Bros. Studios, Burbank in Burbank, California. Additional filming took place in September 2019.

Birds of Prey was released in the United States on April 17, 2020, by Warner Bros. Pictures.

Harley Quinn narrates the events of her life: some time after the Enchantress' defeat, the Joker breaks up with Harley, throwing her out on the streets of Gotham City. She is taken in by Doc, the elderly owner of a Chinese restaurant. Recovering from her abusive relationship with the Joker, Harley cuts her hair, adopts a spotted hyena (whom she names after Bruce Wayne), takes up roller derby, and blows up the Ace Chemicals plant where she pledged herself to the Joker.

At a nightclub owned by gangster Roman Sionis, Harley cripples Roman's driver and meets burlesque singer Dinah Lance. Dinah later rescues an intoxicated Harley from an attempted abduction. Impressed by Dinah's skills, Roman appoints her as his new driver. GCPD Detective Renee Montoya investigates a series of mob killings carried out by a crossbow-wielding killer. Finding Harley's necklace at the scene of the Ace Chemicals explosion, Montoya notes that Harley is in danger without the Joker's protection. She approaches Dinah about informing on Roman, but Dinah rebuffs her.

Roman sends Dinah and Victor Zsasz, his sadistic right-hand-man, to retrieve a diamond embedded with the account numbers to the fortune of the Bertinelli crime family, who were massacred years ago. Young pickpocket Cassandra Cain steals the diamond from Zsasz, but is arrested and swallows the diamond. Harley, fleeing from Montoya and several other people she has wronged, is captured by Roman's men. Zsasz informs Roman that Cassandra has the diamond, and Dinah warns Montoya about Cass. As Roman prepares to have Harley killed, she offers to recover the diamond for him. Roman agrees, but also places a bounty on Cass. Breaking into the GCPD with a variety of non-lethal grenade launcher rounds, Harley frees Cass, who flees to the evidence warehouse. Ambushed by goons seeking Cass' bounty, Harley kills them after inhaling impounded cocaine. She and Cass bond while hiding out at Harley's apartment.

Doc is approached for information by the "crossbow killer", who is revealed to be Helena Bertinelli. Having survived her family's massacre and becoming trained as an assassin, Helena has been targeting the mobsters who killed her family. Harley's apartment is bombed by criminals looking for Cass; it is revealed that Doc sold Harley out. Harley calls Roman and offers to turn Cass over in exchange for his protection, agreeing to meet at an abandoned amusement park. Dinah notifies Montoya of the meeting, but Zsasz notices her text message en route to the park and informs Roman. Devastated by Dinah's betrayal, Roman dons his black mask—from which he gets his villain name, Black Mask. At the park, Montoya confronts Harley but is knocked out of a window. Zsasz arrives and tranquilizes Harley before holding Dinah at gunpoint. He is killed by Helena, who reveals Zsasz was the last of her family's killers.

Montoya returns and a stand-off ensues, until the women realize Roman has arrived with a small army of masked criminals. Using Harley's old gear, the women fight off Roman's goons. Cass is captured by Roman, and Montoya is shot but saved by Harley's bulletproof bustier. Dinah reveals her metahuman ability to scream at a supersonic level, allowing Harley to give chase on roller skates. Assisted by Helena and her motorcycle, Harley pursues Roman and Cass to a nearby pier, where Cass plants a grenade on Roman, killing him.

In the aftermath of destroying Roman's criminal empire, Montoya quits the GCPD and joins Dinah and Helena in becoming vigilantes – the Birds of Prey – with the money from the accounts inside the diamond, which Harley pawns to start her own business with Cassandra. In a post-credits audio scene, Harley is about to reveal a secret about Batman to the audience, but the film ends mid-sentence.

Additionally, Steven Williams portrays Captain Patrick Erickson, Montoya's superior at the GCPD; Dana Lee portrays Doc, Quinn's friend who owns a Chinese restaurant; François Chau portrays Mr. Keo, a rival crime boss of Sionis; Derek Wilson portrays Tim Evans; Matt Willig portrays Happy; and Bojana Novakovic portrays as Erika, a night club patron who gets harrassed by Sionis. Charlene Amoia and Paul Lasa portray Maria and Franco Bertinelli, the mother and father of Helena, respectively, while Robert Catrini portrays Stefano Galante, the mob boss who killed the Bertinelli family. Talon Reid portrays one of Black Mask's henchmen. The Joker appears in the film, through animated-special effects during a flashback sequence, as well as through the combined use of archive footage of Jared Leto from Suicide Squad and a body-double on set. This was done this way since Leto was not available for filming. Jai Courtney appears as George "Digger" Harkness / Captain Boomerang, through the use of a still photograph in the Gotham City Police Department. The reference was added to the film, for additional connections to The Suicide Squad.

Retrieved from "https://movies.fandom.com/wiki/Birds_of_Prey_(2020)?oldid=250253"
Community content is available under CC-BY-SA unless otherwise noted.