watch 00:59
The Loop (Movies)
Do you like this video?
BlackKkKlansman 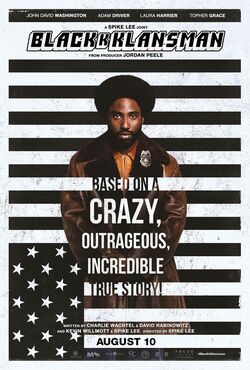 BlacKkKlansman is a 2018 American biographical crime comedy-drama film directed by Spike Lee and written by Charlie Wachtel, David Rabinowitz, Kevin Willmott, and Lee, based on the 2014 memoir Black Klansman by Ron Stallworth. The film stars John David Washington as Stallworth, along with Adam Driver, Laura Harrier, and Topher Grace. Set in 1970s Colorado Springs, the plot follows the first African-American detective in the city's police department as he sets out to infiltrate and expose the local chapter of the Ku Klux Klan.

The film is produced by Lee, Raymond Mansfield, Shaun Redick, Sean McKittrick, Jason Blum, and Jordan Peele. Redick purchased the film rights to the book in 2015, and Lee signed on as director in September 2017. Much of the cast joined the following month, and filming began in New York State.

BlacKkKlansman premiered on May 14, 2018, at the Cannes Film Festival, where it won the Grand Prix. It was theatrically released in the United States on August 10, 2018, coinciding with the one-year anniversary of the white supremacist Unite the Right rally. The film received acclaim from critics, with praise for the performances (particularly of Washington and Driver) and timely themes, as well as noting it as a return to form for Lee. It received six nominations at the 91st Academy Awards, including Best Picture, Best Director for Lee (his first directing nomination), and Best Supporting Actor for Driver. The American Film Institute selected it as one of the top 10 films of the 2018. At the 76th Golden Globe Awards, it earned four nominations, including Best Motion Picture – Drama.

In the early 1970s, Ron Stallworth is hired as the first black officer in the Colorado Springs Police Department. Assigned to work in the records room, he faces racial slurs from his coworkers. After he requests a transfer to undercover work, he is assigned to infiltrate a local rally where national civil rights leader Kwame Ture gives a speech. At the rally, Stallworth meets Patrice Dumas, president of the black student union at Colorado College. While she takes Ture to his hotel, Patrice is stopped by patrolman Andy Landers, a racist officer in Stallworth's precinct, who threatens Ture and gropes Patrice.

After the rally, Stallworth is reassigned to the intelligence division. After reading about a local division of the Ku Klux Klan in the newspaper, he calls posing as white and speaks with Walter Breachway, the president of the Colorado Springs chapter. Stallworth recruits his Jewish coworker, Flip Zimmerman, to act as him to meet the Klan members. Zimmerman meets Walter, the more reckless Felix Kendrickson, and Ivanhoe, who cryptically refers to an upcoming attack.

Calling Klan headquarters in Louisiana to expedite his membership, Stallworth begins regular phone conversations with Grand Wizard David Duke. Kendrickson suspects Zimmerman of being Jewish and tries to make him take a polygraph test at gunpoint, but Stallworth breaks the Kendricksons' kitchen window to distract them. Stallworth begins dating Patrice, but does not tell her that he is a police officer. After passing information to the Army CID about active duty members, he learns from an FBI agent that two members are personnel stationed at NORAD.

Duke visits Colorado Springs for Stallworth's induction into the Klan. Over the real Stallworth's protests, he is assigned to a protection detail for Duke. After Zimmerman, masquerading as Stallworth, is initiated, Felix's wife Connie leaves the ceremony to place a bomb at a civil rights rally. Stallworth realizes her intentions and alerts local police officers. When Connie notices a heavy police presence at the rally, she goes to plant the bomb at Patrice's house instead, which was the pre-arranged Plan B. When she is unable to fit the bomb in her mailbox, she puts it on Patrice's car instead. Stallworth tackles her as she tries to flee, but uniformed officers detain and beat him despite his protests that he is working undercover.

Bombmaker Walker recognizes Zimmerman from a prior arrest. He, Felix and Ivanhoe arrive and trigger the bomb, not realizing where Connie hid it, and are killed in the explosion. Zimmerman arrives and frees Stallworth, and Connie is arrested. While celebrating the closed case that night, Stallworth wears a hidden microphone and tricks a drunken Landers into bragging about his assault on Patrice. Landers is arrested.

Police Chief Bridges congratulates the team for their success, but orders them to destroy the records. Stallworth receives a call from Duke, and he reveals to Duke that he is black before hanging up. While Patrice and Stallworth discuss their future, they are interrupted by a knock on the door. Through the window, they see a flaming cross on a hillside surrounded by Klan members.

The film ends with footage from the 2017 Unite the Right Rally in Charlottesville, Virginia and President Trump's statement afterwards. Followed by a shot of an upside-down American Flag fading into black and white.

In July 2015 screenwriters/co-producers Charlie Wachtel and David Rabinowitz discovered the book Black Klansman by Ron Stallworth. They interviewed Stallworth and wrote a spec screenplay, then pitched the script to producers Shaun Redick and Ray Mansfield. They brought the property to QC Entertainment, which had co-produced the successful 2017 film Get Out. QC again teamed up with Jason Blum's company Blumhouse Productions, and Jordan Peele's company Monkeypaw Productions, to produce the project.

In September of that year, Spike Lee signed on as director and John David Washington was in negotiations to star. The following month, Adam Driver, Laura Harrier, Topher Grace, and Corey Hawkins had joined the cast. In November, Paul Walter Hauser, Jasper Pääkkönen, and Ryan Eggold joined the cast, with Ashlie Atkinson joining a month later.

Filming began in October 2017. Ossining, New York was one location used in October.

Harry Belafonte appears in the film recounting the lynching of Jesse Washington; according to Lee, he commanded his crew on the day of filming Belafonte's scene to dress to the occasion in suits and dresses to honor Belafonte.

Director Spike Lee ends the film with a tribute to peaceful counter-protester, Heather Heyer, who died on August 12, 2017 in the Charlottesville car attack during the Unite the Right rally.

On April 12, 2018, the film was selected to compete for the Palme d'Or at the 2018 Cannes Film Festival, where it premiered on May 14. It opened in the United States on August 10, 2018, which was chosen to coincide with the one-year anniversary of the Charlottesville rally.

Although based on a true story, the plot of the film is considerably more dramatic than the events of the book, and the time period has been shifted. Notably:

As of February 6, 2019, BlacKkKlansman has grossed $48.7 million in the United States and Canada, and $41.3 million in other territories, for a total worldwide gross of $90 million, against a production budget of $15 million.

In the United States and Canada, BlacKkKlansman was released alongside Slender Man and The Meg, and was projected to gross around $10 million from 1,512 theaters in its opening weekend. It made $3.6 million on its first day (including $670,000 from Thursday night previews). It went on to debut to $10.8 million, finishing fifth at the box office and marking Lee's best opening weekend since Inside Man ($29 million) in 2006. It made $7.4 million in its second weekend and $5.3 million in its third, finishing seventh and eighth, respectively.

On review aggregation website Rotten Tomatoes, the film has an approval rating of 95% based on 365 reviews, with an average rating of 8.3/10. The website's critical consensus reads, "BlacKkKlansman uses history to offer bitingly trenchant commentary on current events—and brings out some of Spike Lee's hardest-hitting work in decades along the way." On Metacritic, the film has a weighted average score of 83 out of 100, based on 56 critics, indicating "universal acclaim". Audiences polled by CinemaScore gave the film an average grade of "A–" on an A+ to F scale, while PostTrak reported filmgoers gave it an 85% positive score and a 67% "definite recommend".

Peter Bradshaw of The Guardian gave the film three out of five stars, writing: "It's an entertaining spectacle but the brilliant tonal balance in something like Jordan Peele's satire Get Out leaves this looking a little exposed. Yet it responds fiercely, contemptuously to the crassness at the heart of the Trump regime and gleefully pays it back in its own coin." For IndieWire, David Ehrlich gave the film a grade of "B+" and wrote that it is "far more frightening than it is funny", and "packages such weighty and ultra-relevant subjects into the form of a wildly uneven but consistently entertaining night at the movies".

A. O. Scott, writing for The New York Times, saw the film as both political and provocative in opening up discussion on timely subject matter following Charlottesville. He stated, "Committed anti-racists can sit quietly or laugh politely when hateful things are said. Epithets uttered in irony can be repeated in earnest. The most shocking thing about Flip's (Adam Driver's undercover detective role) imposture is how easy it seems, how natural he looks and sounds. This unnerving authenticity is partly testament to Mr. Driver's ability to tuck one performance inside another, but it also testifies to a stark and discomforting truth. Maybe not everyone who is white is a racist, but racism is what makes us white. Don't sleep on this movie."

In his review for Vulture, David Edelstein found the film to be a potent antidote for previous films which Lee sees as unduly supportive of the racist viewpoint in the past, such as Griffith's The Birth of a Nation. He stated: "Lee himself has a propagandist streak, and he knows nothing ever sold the message of white emasculation and the existential necessity of keeping blacks down as well as Griffith's 1915 film. It revived the Klan and—insult to injury—is still reckoned a landmark of narrative filmmaking. If there were no other reason to make BlackkKlansman, this one would be good enough."

Filmmaker Boots Riley, whose feature film debut Sorry to Bother You also premiered in 2018, took to Twitter on August 17 to criticize the film for its political perspective. While Riley acknowledged the craftswork of the film as "masterful" and cited Lee as a major influence on his own work, he felt that the film was dishonestly marketed as a true story, and criticized its attempts to "make a cop the protagonist in the fight against racist oppression", when Black Americans face structural racism "from the police on a day-to-day basis". In particular, Riley alleged that the film glossed over Stallworth's time spent working for COINTELPRO to "sabotage a Black radical organization", and objected to the film's choices to portray Stallworth's partner as Jewish and to fictionalize a bombing "to make the police seem like heroes". Lee responded in an interview with The Times on August 24, stating that while his films "have been very critical of the police ... I'm never going to say that all police are corrupt, that all police hate people of colour."

Retrieved from "https://movies.fandom.com/wiki/BlacKkKlansman?oldid=268275"
Community content is available under CC-BY-SA unless otherwise noted.