watch 01:20
The Loop (Movies)
Do you like this video?
Black Panther 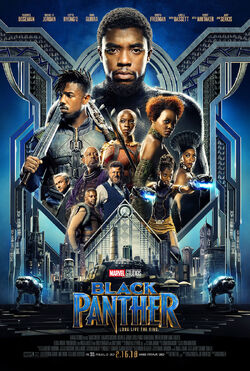 Boseman reprises his role as T'Challa / Black Panther in this film, coninuing the role from 2016's Captain America: Civil War.

The film is the eighteenth entry in the Marvel Cinematic Universe, and the sixth entry in Phase Three. It was extremely popular as indicated by the "box office gross". It ranked, in U.S. box office, even above Avengers:_Infinity_War.

In the distant past, five African tribes were battling for control over a meteorite containing Vibranium. One warrior, named Bashenga, ingests a "heart-shaped herb" affected by the metal and gains superhuman abilities, becoming the first "Black Panther". He "unites" under his dominion, all but the Jabari Tribe to form the nation of Wakanda. Recently, the Wakandans use the vibranium to develop their high-tech. They hid and isolated themselves from the world. When they interact they pretend to be a "developing" low-tech country.

In 2016, an explosion assassinated T'Chaka, [N 1] ergo his son T'Challa inherited the throne. Now in 2018, king T'Challa returns to Wakanda to join his mother Ramonda and younger sister Shuri.

He and Okoye, the leader of the Dora Milaje regiment, extract T'Challa's ex-lover Nakia from an undercover assignment so she can attend his coronation ceremony. At the ceremony, the Jabari Tribe's leader M'Baku challenges T'Challa for the crown. T'Challa defeats M'Baku, in ritual combat, and persuades him to yield so he would not kill M'Baku.

In Britain, Klaue and his accomplice Erik Stevens steal a Wakandan artifact from a museum. W'Kabi, T'Challa's friend and Okoye's lover, urges T'Challa to bring Klaue to justice. T'Challa, Okoye, and Nakia travel to Busan, South Korea, where Klaue plans to sell the artifact to CIA agent Everett K. Ross. There, a firefight erupts. When Klaue attempts to flee, T'Challa catches him and is about to kill him but not in front of the cameras. Reluctantly T'Challa releases him to Ross' custody for CIA. During interrogation, Klaue tells Ross that Wakanda's image is fake. It hides a technologically advanced civilization. Erik attacks and extracts Klaue from the interrogation. Ross is gravely injured. Rather than pursue Klaue, T'Challa takes Ross to Wakanda, where their technology can save him.

While Shuri heals Agent Ross, T'Challa confronts Zuri about N'Jobu. Zuri explains that N'Jobu planned to give Wakanda's technology to people of African ethnicity who are oppressed, so they can conquer their oppressors. Also retelling about N'Jobu's son who became a U.S. black ops soldier, naming himself "Killmonger".

Elsewhere, Killmonger kills Klaue and takes his body to Wakanda. He is brought before the tribal elders, revealing his identity to be N'Jadaka and claim to the throne. Killmonger challenges T'Challa to ritual combat, where he kills Zuri, defeats T'Challa, and hurls him over a waterfall to his presumed death. Killmonger ingests the heart-shaped herb and orders the rest incinerated, but Nakia extracts one first. Killmonger, supported by W'Kabi and his army, prepares to distribute shipments of Wakandan weapons to operatives around the world.

Nakia, Shuri, Ramonda, and Ross flee to the Jabari Tribe for aid. They find a comatose T'Challa, rescued by the Jabari in repayment for sparing M'Baku's life. Healed by Nakia's herb, T'Challa returns to fight Killmonger, who dons his own Black Panther suit. W'Kabi and his army fight Shuri, Nakia, and the Dora Milaje, while Ross remotely pilots a jet and shoots down planes carrying the vibranium weapons. M'Baku and the Jabari arrive to reinforce T'Challa. Confronted by Okoye, W'Kabi and his army stand down. Fighting in Wakanda's vibranium mine, T'Challa disrupts Killmonger's suit and stabs him. Killmonger refuses to be healed, choosing to die a free man rather than be incarcerated.

T'Challa establishes an outreach center at the building where N'Jobu died, to be run by Nakia and Shuri. In a mid-credits scene, T'Challa appears before the United Nations to reveal Wakanda's true nature to the world. In a post-credits scene, Shuri helps Bucky Barnes with his recuperation.

Retrieved from "https://movies.fandom.com/wiki/Black_Panther?oldid=251053"
Community content is available under CC-BY-SA unless otherwise noted.