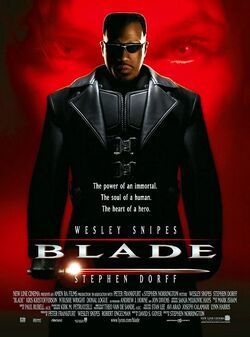 Blade is a 1998 American supernatural superhero film directed by Stephen Norrington. The cast of the film consists of Wesley Snipes, Stephen Dorff, Kris Kristofferson, N'Bushe Wright, in supporting roles. In the film, Blade is a Dhampir, a human with vampire strengths but not their weaknesses, who protects humans from vampires.

Released on August 21, 1998, Blade became a commercial success by grossing $70 million at the U.S. box office, and $131.2 million worldwide. Despite mixed reviews from film critics, the film received a positive reception from audiences and has since garnered a cult following. It is the first film in the Blade franchise, followed by two sequels, Blade II and Blade: Trinity, both written by Goyer who also directed the latter.

Blade was a dark superhero film for its time. The success of Blade began Marvel's film success and set the stage for further comic book film adaptations.

In 1967, a pregnant woman is attacked by a vampire while giving birth. Doctors are able to save her baby, but the woman dies of infection.

Thirty years later, in 1997, the child has become the vampire hunter Blade. He raids a Los Angeles rave club owned by the vampire Deacon Frost. Police take one of the vampires to the hospital, where he kills Dr. Curtis Webb and feeds on hematologist Karen Jenson and escapes. Blade takes Karen to a safe house where she is treated by his old friend Abraham Whistler (Kristofferson). Whistler explains that he and Blade have been waging a secret war against vampires using weapons based on their elemental weaknesses, such as sunlight and silver. As Karen is now "marked" by the bite of a vampire, both he and Blade tell her to leave the city.

Meanwhile, at a meeting of vampire elders, Frost, the leader of a faction of younger vampires, is rebuked for trying to incite war between vampires and humans. As Frost and his kind were not born as vampires and are therefore not pure-bloods, they are considered socially inferior. In response, Frost has one of the elders executed and strips the others of their authority.

Upon returning to her apartment, Karen is attacked by police officer Krieger, who is a "familiar", a human slave controlled by a vampire. Blade subdues Krieger and uses information from him to locate an archive of vampire history. Later, at the hideout, Blade injects himself with a special serum that prevents him from succumbing to his desire to drink blood. However, the serum is beginning to lose its effectiveness due to overuse. Krieger informs Frost of what happened, and Frost kills and eats Krieger.

While experimenting with the anticoagulant EDTA as a possible replacement, Karen discovers that it explodes when combined with vampire blood. She manages to synthesize a vaccine that can cure the infected, but learns that it will not work on a human-vampire hybrid like Blade. Karen is confident that she can cure Blade's bloodthirst but it would take her years of treating it. Frost and his men attack the hideout, infect Whistler, and abduct Karen. When Blade returns, he helps Whistler commit suicide and arms himself with special syringes filled with EDTA.

When Blade attempts to rescue Karen from Frost's penthouse, he is shocked to find his still alive mother, who reveals that she came back that very night and was brought in by Frost, who appears and reveals himself as the vampire who bit her. Blade is then subdued and taken to the Temple of Eternal Night, where Frost plans to perform the summoning ritual for La Magra, the vampire blood god. Karen is thrown into a pit to be devoured by Webb, who has transformed into a decomposing zombie-like creature. Karen injures Webb with a sharp bone and escapes. Blade is drained of his blood, but Karen allows him to drink from her, causing him to recover. Frost completes the ritual and obtains the powers of La Magra. Blade confronts Frost after killing all of his minions, including Blade's mother. During their fight, Blade injects Frost with all of the syringes, causing his body to inflate and explode, killing him.

Karen offers to help Blade cure himself, but he asks her to create a new serum instead. In a brief epilogue, Blade confronts a vampire in Moscow.

Director Stephen Norrington portrayed Michael Morbius. The deleted scene was filmed but not included in the finished film.

Marvel Studios had developed the film as early as 1992, when rapper/actor LL Cool J was interested in playing the lead role. Blade was eventually set up at New Line Cinema, with David S. Goyer writing the script. According to Goyer, New Line originally wanted to do Blade as "something that was almost a spoof" before the writer convinced them otherwise. By 1996 Wesley Snipes was attached to star.

When Goyer first pitched the idea of doing a Blade film, the executives of New Line felt there were only three actors who could possibly do the role: Snipes, Denzel Washington, and Laurence Fishburne, but to Goyer, Snipes was always the perfect choice for Blade. Marc Singer was the original choice for Whistler. Jet Li was offered the role of Deacon Frost but opted to do Lethal Weapon 4 instead. Bruce Payne was also considered for the role of Frost.

Blade was produced on a budget of $45 million and principal photography commenced on February 5, 1997, in large part done in Los Angeles, with some scenes being shot in Death Valley. All sets were constructed, and all on-set filming occurred, in what was formerly the Redken Shampoo factory in Canoga Park. The effects for the film were done by Flat Earth Productions.

A soundtrack containing hip hop music was released on August 25, 1998 by TVT Records and Epic Records. It peaked at #36 on the Billboard 200 and #28 on the Top R&B/Hip-Hop Albums. The British techno band The Prodigy were approached to do the soundtrack and score to the film but had to turn down the offer due to other commitments.

The first cut of the film was 140 minutes long and it had a disastrous test screening with audiences. Heavy edits and re-shoots were implemented which delayed the release date more than half a year. The most significant change was the addition of the final sword fight between Blade and Deacon Frost, which did not exist in the original cut. In the original ending, Frost turned into La Magra and became a large swirling mass of blood instead of keeping his form. This was scrapped because they couldn't get the special effects to look right. It can be seen as a special feature on the DVD. Stan Lee originally had a cameo that was ultimately cut from the film. He played one of the cops that came in to the blood club during the aftermath and discover Quinn's body on fire. The scene where Karen and Deacon are talking about the cure for vampirism initially ran a bit longer and answered the question of how the vampires would feed if everybody was turned into a vampire. They would keep some humans alive in giant blood bags to harvest them. The bags can still be seen in a doorway during the scene, and later played an integral part of the plot in Blade: Trinity.

Connections to the comic

The character Blade was created in 1973 for Marvel Comics by writer Marv Wolfman and artist Gene Colan as a supporting character in the 1970s comic The Tomb of Dracula. The comic Blade used teakwood knives and was much more the everyman in his behavior and attitude. Though courageous and brave, he displayed flaws as well, such as an inability to get along with certain other supporting cast members and a hatred of vampires that bordered on fanaticism.

The character was not originally a "daywalker" but a human being immune to being turned into a vampire. Lacking the superhuman speed and strength of his undead quarry, he relied solely on his wits and skill until he was bitten by the character Morbius as seen in Peter Parker: Spider-Man #8, first published in August 1999. The film portrayal of Blade was updated for a 1990s audience and the comics character was subsequently modified to match. The film's version of Deacon Frost also differs greatly from his comic counterpart. Although the movie retains Frost's upstart ambitions, he was a great deal younger and more updated for the 1990s.

Blade was Marvel's first box office success, and set the stage for further comic film adaptations. Blade followed the disastrous Howard the Duck as the second Marvel property to get a wide theatrical release in the United States. The Punisher and Captain America both had films made previously, but neither saw a theatrical release in the United States.

The film went to number one in both Spain and Australia for their opening weekends. With 200 theatres showing the film, Spain's filmgoers earned the film $1.5 million (US) in three days, whilst Australia earned $1 million from 132 cinemas showing the film. In the Flemish Region of Belgium, the film earned $323,000 from 20 cinemas, and the Netherlands earned the film $246,000 from 44 cinemas. France made $1.9 million in five days from 241 cinemas, but the film was less successful in Hong Kong (with $182,000 from 22 cinemas) and South Africa ($159,000 from 64 cinemas). The United Kingdom was more successful, taking in $5.7 million over 10 days, as was Brazil, making $855,000 in four days from 133 cinemas. The film was banned from showing in Malaysia, widely considered to have the most controlling censors in Southeast Asia.

On review aggregator Rotten Tomatoes, the film holds a 54% rating, saying that "Though some may find the plot a bit lacking, Blade's action is fierce, plentiful, and appropriately stylish for a comic book adaptation." On Metacritic the film has a score of 45/100 based on reviews from 23 critics. Audiences polled by CinemaScore gave the film an average grade of "A-" on an A+ to F scale.

Critics such as A. Asbjørn Jøn have noted not only the important place of Blade in the wider vampire genre but also possible intertextual links between the Whistler character and a character named Whistler in A Dozen Black Roses (1996) by Nancy A. Collins, as they possess "striking similarities in role, dramatic focus, visual appearance, and sharing the name".

Marv Wolfman unsuccessfully sued Marvel, New Line, and Time Warner for $35 million after the release of the film, claiming he was not bound by a work for hire contract when he created the character in 1972. He, along with artist Gene Colan, received a "based on characters created by" credit in this film, but did not receive a credit in Blade II or the TV series.

A video game based on the movie was published and released by Activision in 2000.

In August 2014, Snipes spoke about his desire to return to the franchise, telling MTV.com, "I'd be open to it. I think we've got some stones left unturned and there's some latitude left for us to build on and I'd love to get back in the suit again and do some things I've learned how to do now that I didn't know how to do then."