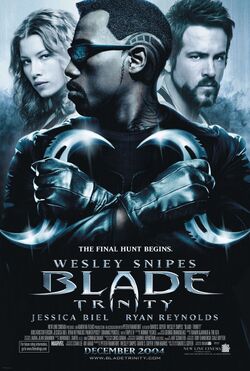 It is the third and final film in the Blade film series. The film grossed $128 million at the box office worldwide on a budget of $65 million. On Rotten Tomatoes, Blade: Trinity has a 25% approval rating, with a critical consensus that it "seems content to emphasize style over substance and rehash familiar themes." The film was followed by 2006's Blade: The Series, and also marks Reynolds' first superhero role, as well as his first collaboration with Marvel Entertainment. Marvel regained the film rights to the character in 2011.

Vampires investigate an ancient tomb in the Syrian Desert, which they believe belongs to Dracula, the first vampire. To keep Blade from interfering, they frame him for the murder of a human familiar. FBI agents subsequently locate Blade's hideout and kill his mentor and friend, Abraham Whistler. Demoralized, Blade surrenders and is arrested.

The vampires' familiars have arranged for the authorities to turn Blade over to them. He is rescued by Hannibal King and Abigail Whistler, Abraham's daughter, who invite Blade to join their band of vampire hunters, the Nightstalkers. From them, Blade learns that Danica Talos, an old enemy of King's, has revived Dracula, or "Drake", with the goal of using his powers to cure vampires of their weaknesses. As the first of the vampires, Drake's DNA is untainted and he is able to survive in sunlight. Along with newly-innovative ultraviolet "Sun dog" ammunition, the Nightstalkers have created an experimental bioweapon known as Daystar, capable of killing vampires at the genetic level. However, they need a purer blood source to make it effective. As Drake is too powerful to kill via normal means, they hope that the virus will kill him and, with his blood in the mix, ensure the rest of the species is wiped out, but also fear that this will include Blade, too.

Eager to test Blade, Drake isolates him from the Nightstalkers, as he considers them unworthy of challenging him. He explains that all humans and vampires are inferior in his eyes and that he intends to wipe them from the Earth. Abigail finds evidence of the vampires "Final solution": a network of 'farms' where comatose humans are drained of their blood for vampire consumption. Told the humans are all brain dead, Blade deactivates the farm's life support systems.

Returning to the Nightstalkers' hideout, Abigail and Blade find all of them dead except for King and Sommerfield's daughter Zoe, both of whom have been taken captive. A recording left by Sommerfield, Daystar's creator, reveals that Drake's blood is all that is needed to make it complete and effective. King is tortured by the vampires for information, but refuses to talk, even when they threaten to turn him and feed him Zoe's blood.

Blade and Abigail arrive and free the captives. Drake eventually bests Blade in single combat and prepares to kill him with his own sword. Abigail fires the Daystar arrow, but Drake catches it before it strikes him. He drops it to the floor by Blade, not realizing the danger it poses to him. Abigail shoots Drake with another arrow, this time wounding him. At the last second, Blade stabs him with it, triggering a chemical reaction that completes the "Daystar" virus, releasing it into the air, the virus becomes airborne, killing Danica and the rest of the vampires. As Drake slowly succumbs to his wounds and the virus, he praises Blade for fighting honorably, but warns him that he will eventually succumb to his need for blood, thus proving that Blade already is the new type of vampire.

Using the last of his power, Drake disguises himself as Blade. The FBI recover the body and declare Blade legally dead (In the unrated cut, as the FBI tries to do an autopsy on "Blade", Drake springs back to life, killing several of the autopsy members before ominously looming over one of the orderlies). Hannibal narrates that the virus did not kill Blade as the human half of his heart did not stop beating, it only slowed down, causing him to enter into a comatose state until his body was ready to fight again. Blade awakens several months later ready to continue his fight against the vampires.

Reportedly, series star Wesley Snipes was unhappy with the film's script and original choice of director. David S. Goyer, who had written all three films in the franchise, was then selected to replace the original director of the film, which Snipes also protested. Snipes reportedly caused difficulty during filming, including frequently refusing to shoot scenes, often forcing director Goyer to use stand-ins and computer effects to add his character to scenes. Co-star Patton Oswalt alleged that Snipes would spend much of his time smoking marijuana in his trailer, and that he became violent with Goyer after falsely accusing him of racism. It has also been alleged that Snipes refused to interact with Goyer or his co-stars, and would instead communicate with them through his assistant or the use of notes. Snipes also allegedly referred to co-star Ryan Reynolds as a "cracker" on one or more occasions.

In the DVD special features, Goyer talks about how cities are often multilingual. For example, Blade: Trinity was shot in Vancouver, British Columbia, Canada, where signs are in English. Goyer used Esperanto and its flag as part of the fictional city where Blade is set. The Esperanto flag is shown twice, at the entrance to the Police headquarters after Blade is rescued from jail, and in the rooftop scene where Drake threatens to drop a baby over the edge. Background elements such as signs and advertisements include Esperanto translations. Hannibal King is at one point seen watching the William Shatner-starring Esperanto language film Incubus on television; one reviewer remarked that it was an "an unintentionally apt reference" considering first-time director "Goyer's grasp of directorial fundamentals (such as when to tilt the camera and when to shoot in close-up) is about as strong as Shatner's fluency in Esperanto." The film's director of photography, Gabriel Beristain, makes a cameo appearance as the one-eyed newspaper vendor who talks to Whistler in Esperanto and discusses the public perception that Blade is a menace to society.

A soundtrack containing hip hop music and electronic music was released on November 23, 2004 by New Line Records. It peaked at #68 on the Top R&B/Hip-Hop Albums and #15 on the Top Soundtracks.

The film's American box office gross was $52 million, and the total worldwide gross was $128.9 million. This matched the first Blade's take but came behind Blade II, which had grossed $150 million worldwide.

In 2005, Snipes sued New Line Cinema and Goyer, claiming that the studio did not pay his full salary, that he was intentionally cut out of casting decisions and the filmmaking process, despite being one of the producers, and that his character's screen time was reduced in favor of costars Ryan Reynolds and Jessica Biel.

The film earned an approval rating of 25% on Rotten Tomatoes based on 167 reviews. The consensus reads: "Louder, campier, and more incoherent than its predecessors, Blade: Trinity seems content to emphasize style over substance and rehash familiar themes." Rotten Tomatoes included the film at 76 out of 94 on a countdown (from 94 to 1) of "worst to best" comic book to film adaptations.

Roger Ebert, who gave Blade 3 stars out of 4 and Blade II 3½ stars, gave Blade: Trinity 1½ stars, writing: "It lacks the sharp narrative line and crisp comic-book clarity of the earlier films, and descends too easily into shapeless fight scenes that are chopped into so many cuts that they lack all form or rhythm." James Berardinelli also rated the film 1½ stars out of 4, stating: "Blade: Trinity is a carbon copy of its predecessors. It's all kick-ass attitude and style without any substance to back it up. Yet, where the first two Blades satisfied on a visceral level, this one doesn't."

Audiences polled by CinemaScore gave the film an average grade of "B+" on an A+ to F scale.

Retrieved from "https://movies.fandom.com/wiki/Blade:_Trinity?oldid=185237"
Community content is available under CC-BY-SA unless otherwise noted.