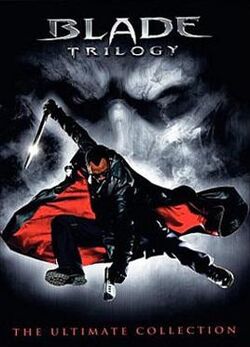 Blade is a film and television franchise based on the fictional Marvel Comics character of the same name, portrayed by Wesley Snipes. They were written by David S. Goyer, based on the comics by Marv Wolfman, and Gene Colan. The three films were directed by Stephen Norrington, Guillermo del Toro and Goyer respectively, and distributed by New Line Cinema.

The character was created in 1973 for Marvel Comics by writer Marv Wolfman and artist Gene Colan and was a supporting character in the 1970s comic Tomb of Dracula. In the comic, Blade's mother was bitten by a vampire while she was in labor with Blade.

Blade grows up to become a Vampire Hunter, swearing vengeance on the creatures that killed his mother. He teams up with a man called Whistler, a retired vampire hunter and weapons expert.

Meanwhile, in the urban underworld, a feud is started between "pure-blood" vampires and those who had been human, but were "turned." Blade becomes aware of this and investigates further, uncovering a plot to raise the blood god La Magra, something he must stop at all costs.

A rare mutation has occurred within the vampire community. "Reapers" are vampires so consumed with an insatiable bloodlust that they prey on vampires as well as humans, transforming victims who are unlucky enough to survive into Reapers themselves. Now their quickly expanding population threatens the existence of vampires, and soon there won't be enough humans in the world to satisfy their bloodlust. Blade, Whistler and an armory expert named Scud are curiously summoned by the Shadow Council. The council reluctantly admits that they are in a dire situation and they require Blade's assistance. Blade then tenuously enters into an alliance with The Bloodpack, an elite team of vampires who were trained in all modes of combat to defeat Blade. They'll use their skills instead to help wipe out the Reaper threat. Blade's team and the Bloodpack are the only line of defense which can prevent the Reaper population from wiping out the vampire and human populations.

The vampires succeed in framing Blade for the killing of a human (who was in fact a familiar being used as bait). Blade, now in the public's eye and wanted by the FBI, has to join forces with the Nightstalkers, a human clan of vampire hunters. Blade, Hannibal King, and Abigail Whistler go after Danica Talos, who has succeeded in locating and resurrecting Drake, also known as Dracula, the first vampire and by far the most powerful. In order to stop him, Blade has to release a virus that will wipe out all vampires, but being a dhampir, he must face the possibility of also dying as a result.

By August 2012, the film rights to Blade had reverted to Marvel Studios. In May 2013, The Hollywood Reporter reported that Marvel had a working script for Blade. At San Diego Comic Con 2015, Snipes told IGN that both he and Marvel were in talks about bringing Blade back to theaters. In 2016, Underworld actress Kate Beckinsale stated that Marvel was doing something with Blade, after she was asked about a crossover between both franchises.