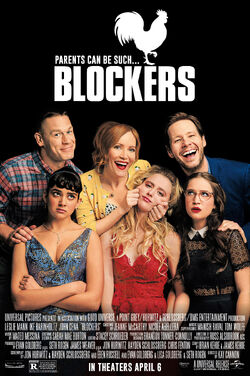 Blockers is an American comedy film directed by Kay Cannon. The cast of the film consists of Leslie Mann, Ike Barinholtz, John Cena, and Kathryn Newton.

Single mother Lisa Decker drops off her young daughter, Julie, for her first day of kindergarten. She watches on as Julie is joined by two other girls, Kayla and Sam. Kayla's dad Mitchell and Sam's dad Hunter introduce themselves and become close friends after seeing the bond between their children.

Twelve years later, on the day of the senior prom, Julie shares with her best friends, Kayla and Sam, that she plans to lose her virginity to her boyfriend Austin. Kayla immediately pledges to do so as well, though on a casual basis with her lab partner and school drug cook Connor. Sam, a closeted lesbian confused about her feelings, is reluctant, but joins the pact out of a desire for a shared experience that will bind her to her two best friends as they go on to college. She goes to prom with the harmless, fedora-wearing Chad.

Lisa sets up a pre-party for the parents and kids. Mitchell greets Lisa, and notes that she has been evading his attempts to catch up. Hunter, divorced from Sam's mother after his infidelity and ostracized by the other parents, arrives in a limousine for the girls, and pledges to make this night the best of Sam's life. The girls head to the prom, and text each other about their sex pact. Back home, Mitchell and Lisa hear Julie's still-open laptop and intercept the messages. They are unsure what the girls are discussing, as they are conveying messages through emojis. However, Hunter joins in and helps them decipher the emoji codes, and they find about the girls' pact. Lisa and Mitchell rush to stop their daughters from following through, but Hunter tries to stop them. Hunter shares his intuition that Sam is gay, and that Chad is a beard, but at the first party, he sees her force herself to kiss Chad. Wanting to protect Sam from doing something she doesn't want to do, he joins Lisa and Mitchell's crusade.

Thinking that the after-party would be at Austin's house after being told so, the trio go there to look for the kids. Instead, they find Austin's parents Ron and Cathy engaging in heavy sexual intercourse. Ron spots Mitchell and comes as they stare at each other. Ron then comes outside, not mad as he knows Lisa and Mitchell. He reveals that the after-party is at a lake house, but refuses to give the address. The trio realizes that Mitchell's wife Marcie may have it, and go back to his house. Against Marcie's wishes, they retrieve the address and head to the lake house. However, the cops arrive and they are forced to flee.

As they follow the girls from party to party, it becomes clear that each parent has an unresolved problem behind their motivation. Mitchell is overprotective and in denial over his daughter's sexuality, and thinks she needs protecting from men like Connor. Hunter feels guilty for neglecting Sam during his bitter separation from her mother, who cheated on him and assaulted him in public to his humiliation. Lisa is struggling to let go of her only child, and is still depressed over Julie's plans to go with Austin to UCLA instead of to a closer college such as University of Chicago. This culminates in a heated phone call between her and Julie, who claims that UCLA is the furthest she can get from her imposing mother, and that she is not following Austin; it is the other way around.

The parents return to Austin's house after wrecking Lisa's car, attempting to grab one of the parents' phones and find out where the girls went. After barging in on the couple playing a sex game, Hunter is forced to go along with it as Mitchell grabs the phone. They travel to the hotel where another party is being held, hoping to finally stop their daughters.

The parents arrive, with Mitch storming into many rooms searching for Kayla. He eventually finds her making out with Connor, whom he throws through a table. Kayla is initially furious, but ultimately appeased by her father's good intentions, and reveals that she does not need protecting, as he already taught her everything about protecting herself. Sam and Hunter share a tender moment, where he reveals that a good night was the best he could give her in return for his neglect. After, Sam officially comes out to her father, who is deeply moved at being the first person she told. Sam indulges Hunter in his much-sought prom night photo, but he declares that he will remember the moment without one. Lisa sneaks into Julie and Austin's room and is moved by how much the two clearly love each other. She sneaks out of the hotel room unnoticed, and leaves the two of them alone while they have sex.

Lisa promises to keep in touch with Mitchell more, whose friendship she had been spurning, because he represents her daughter's youth. The two of them also make Hunter welcome, acknowledging his emotional pain of being ostracized. The three girls share prom night stories and Sam (following Hunter's advice) comes out to them, to which Julie and Kayla are extremely supportive. They leave Sam with her crush, Angelica, who shares a romantic kiss with her. Chad raps for the crowd and everyone dances.

Three months later, Julie goes off to college, with Sam and Kayla driving with her to California. As they drive away, Lisa realizes that she's been added into their group text, which is now filled with plans to get marijuana, cocaine, pills, and have condom-less sex. As the three parents run for the car, the girls reveal that it was a prank, and text a final "I love you" to them, to the relief of the three parents.

In a mid-credits scene, Mitchell and Marcie are seen playing the blindfold game that Austin's parents had been playing earlier in the film. They find each other, but Kayla walks in on them and exclaims in shock while her parents do the same.

Retrieved from "https://movies.fandom.com/wiki/Blockers?oldid=199629"
Community content is available under CC-BY-SA unless otherwise noted.