Start a Wiki
watch 01:27
The Loop (Movies)
Do you like this video?
Blood Simple 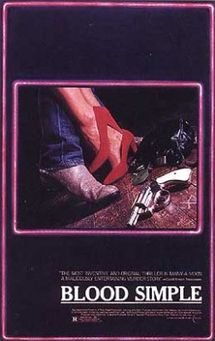 Blood Simple is a 1984 neo-noir crime film. It was the directorial debut of Joel and Ethan Coen, and the first major film of cinematographer Barry Sonnenfeld, who later became a noted director. In 2001 a "director's cut" DVD was released.

The film's title derives from Dashiell Hammett's novel Red Harvest, in which "blood simple" is a term coined to describe the addled, fearful mindset people are in after a prolonged immersion in violent situations.

In an unnamed Texas town, a bar manager, Ray (John Getz) and his boss's wife, Abby (Frances McDormand), are suspected of having an affair by her husband, Julian Marty (Dan Hedaya).

A private detective (M. Emmet Walsh) hired by Marty, Loren Visser, has subsequently taken photos of Ray and Abby while they stayed at a local motel, a stay during which Marty makes a menacing phone call to them, making it clear that he is now well aware of their relationship.

The next day Ray confronts Marty at the bar, it ends badly and Ray quits, walking out at which point Marty threatens Ray's life. However, after yet another ugly incident between the three, Marty arranges for Visser to kill the pair, and on the detective's suggestion, Marty goes on a fishing trip to create an alibi. That night, Visser breaks into Abby's apartment and steals her gun.

Visser, using photos he has doctored to make it appear that he has actually murdered the lovers, goes to collect his $10,000 fee from Marty, whereupon he kills Marty with Abby's gun. Upon leaving, the detective does not realize that not only has he left behind his lighter, but one of the incriminating photos is now locked in the bar's safe. Abby's revolver is kicked into the corner, presumably to implicate her when it is found.

Later, that same evening, Ray arrives at the bar to insist that Marty pay him the wages he's owed. Marty, sitting in a chair facing away from him, doesn't respond to anything Ray says, and doesn't move when Ray steps on Abby's gun, setting it off. Ray walks around the chair and sees that Marty quite dead, bleeding out onto the floor. Ray discovers the gun, which he recognizes as Abby's. Ray is interrupted by another employee, Meurice, who arrives in the bar outside Marty's office. Ray runs to shut and lock the office door; Meurice calls for Marty, gets no response, and puts his signature song, The Four Tops' "It's the Same Old Song," loudly, on the jukebox. Ray uses the noise from outside to mask his cleaning the office, and removes Marty's body, dropping Abby's gun into Marty's coat pocket, packs the body into his car and drives off, but not before throwing the windbreaker and towel into the incinerator behind the bar.

Driving down the highway, he hears a noise from the rear seat: Marty is alive. Panicking, Ray stops the car, jumps out, and runs a short distance over a farm field. On returning to the car, he sees that the back driver's side door is open and Marty is gone. He is crawling down the highway, muttering. At first Ray debates running him over with his car, but then follows him with a shovel, intending to kill him that way, but is interrupted by an oncoming tractor-trailer. Ray considers throwing Marty into the path of the truck, but instead he picks up Marty and drags him back to the car, forcing him in as the semi passes. Ray drives to the middle of a field, digs a hole and throws Marty in. He is in process of burying him when Marty discovers Abby's gun in his jacket pocket. He pulls it out, trembling, points it at Ray, and pulls the trigger. It clicks; he pulls it again, and again; Ray removes the gun from him and continues to bury Marty alive. The next morning Ray drives off.

Meanwhile, Visser returns to his apartment and burns the series of try-out doctored copies of the photograph he used to fake the murder of Abby and Ray; upon opening the envelope in which was the one he handed out to Marty, he discovers that Marty has replaced one of the incriminating faked photos with a sign admonishing employees to wash their hands before returning to work. Annoyed, he then goes to light his cigarette, but notices his prized lighter is gone, and mistakenly believes somebody may have taken it.

At Abby's apartment, a deeply disturbed Ray tries to explain that he cleaned up Abby's mess. Abby does not understand what Ray is talking about, and they get into an argument. Ray thinks Abby is being coy for some reason he doesn't understand; Abby, seeing the blood on Ray's shirt, assumes that he was in a fight with Marty. Visser calls Abby, the phone's ring interrupting their argument; when Abby answers, however, he says nothing and Abby hangs up.

Horrified, Ray leaves. Meanwhile, Meurice checks his answering machine and gets a message from Marty claiming that a large amount of money has been stolen from the safe and either he or Ray took it. Meurice goes to confront Ray. Abby goes to Marty's bar to try to find out what Ray was talking about. Abby finds the bar ransacked, the safe's combination lock dented, chipped, and partially shattered. Visser had been trying to break into the safe and was interrupted by Abby's arrival: he is hiding in the bar watching Abby move about. She picks up a towel from the top of the safe; a hammer falls out. Abby spins the dial but does not open the safe. The now-rotting fish that Marty brought back from his trip are still on the desk where Marty was killed; the lighter is still underneath.

At her apartment, Abby lies in bed; she gets up to wash her face and hears someone enter the apartment. She calls Ray's name, then pushes open the bathroom door. Marty is sitting on the bed. He tells her that he loves her, and then warns her; "He'll kill you too.", then pitches forward and vomits a torrent of blood. Abby wakes up from the dream. Ray is at his apartment packing. Abby thinks that Marty refused to pay Ray, that Ray broke into the bar to get his money, and that the two of them got into a fight. Ray interrupts and tells her it was her gun at the bar, that he can't eat or sleep lately, and that Marty was alive when he buried him.

Abby leaves to tell Meurice that she thinks Marty is dead; Meurice leaves for the bar. Ray is at the bar; he opens the safe and finds the faked photo showing him and Abby dead in bed. He leaves for Abby's apartment and notices a car parked behind him, the driver watching him in the same car that was following them at the beginning of the movie. Ray pulls out, and the driver--Visser--follows him.

Abby arrives at her apartment and turns on the lights; Ray is looking out a large window and tells Abby to turn off the light. Abby is reluctant to do so. Visser is on top of a nearby building with a sniper rifle, with which he shoots and kills Ray. Abby runs to crouch beneath the window, takes off her shoes, and throws them at the light bulb, breaking it. Visser arrives at the door, and she goes to the bathroom to hide; outside the bathroom window is a precipitous drop. In Abby's sparsely furnished living room, Visser bludgeons Ray with a large coin bank, then searches Ray's pockets for the lighter, thinking he took it. Failing to find it, he goes into the bathroom. Abby is not there; he looks outside the window, then reaches his arm over, finding a window to another room in a neighboring apartment. He opens the window; Abby slams it on top of his wrist and drives a knife through his hand into the windowsill. Visser screams and shoots holes through the wall, then punches through and removes the knife. Abby, dazed, backs out of the room and slides down the wall opposite the bathroom door, holding a gun. The door is partly closed; eventually the man's shadow darkens the doorway, and Abby fires through the door. The detective falls. "I'm not afraid of you, Marty," Abby says. Visser, lying on the bathroom floor with a massive hole his stomach, suddenly begins laughing: "Well, ma'am, if I see him, I'll sure give him the message."

Retrieved from "https://movies.fandom.com/wiki/Blood_Simple?oldid=134672"
Community content is available under CC-BY-SA unless otherwise noted.