watch 00:59
The Loop (Movies)
Do you like this video?
Blumhouse's Truth or Dare 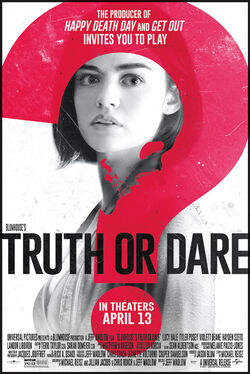 Olivia Barron, her best friend Markie Cameron, Markie’s boyfriend Lucas Moreno, along with Penelope Amari and her boyfriend Tyson Curran, and Brad Chang go on a trip to Rosarito, Mexico. In Mexico, Olivia runs into fellow student Ronnie who proceeds to harass her until a man intervenes on her behalf. The man introduces himself as Carter and eventually convinces her and her friends to join him for drinks at the ruins of a mission. There, Carter initiates a game of Truth or Dare with Olivia and her friends, plus Ronnie, who followed the group. Eventually, the game ends when Carter reveals that he deceived Olivia as a means of tricking her and her friends to the mission to offer them in his place in the supernatural game of Truth or Dare. As Carter leaves, he explains to Olivia that the game will follow them and they must not refuse it.

At a local college bar, sometime after everyone returned from Mexico, Ronnie dies when he fails to complete a dare. Olivia, having become convinced that Carter was telling the truth, gathers her friends and attempts to convince them that the game is real. The game, playing in accordance to the order the group played in Mexico, turns to Markie, having already appeared to Olivia and Lucas, and she is forced to break Olivia's hand. At the hospital, Brad is then forced by the game into revealing to his father, Officer Han Chang, his homosexuality.

The next day, the skeptical Tyson lies when forced to tell a truth and, as a result, dies. Later that night, it's Penelope's turn to play the game. She tries to pick truth but is forced by the game to do a dare. Penelope is dared to drink and finish a full bottle of vodka whilst walking along the edge of the roof of her house. She eventually falls from the roof after finishing the bottle, but is saved by Brad, Markie, and Olivia. The group manage to come into contact with a woman named Giselle, who is also a participant in a separate incarnation of the game, and the group go to meet her.

Giselle reveals that she and her friends played the game and her friend Sam, the only other survivor of her incarnation of the game, was responsible for the game becoming reality in the first place, having wrecked the ruins of the mission. Giselle reveals that a truth can only be chosen twice before the next player is forced to choose dare. Giselle draws a handgun on Olivia and shoots, confessing that she was dared to kill her. However, Penelope jumps in front of Olivia and is shot and killed. Failing to kill Olivia, Giselle shoots herself in the head.

Olivia and Lucas drive to Tijuana and meet with a mute woman and former nun who operated out of the church in which they originally played the game. The woman informs them that they are dealing with a demon she first summoned, who possessed the game of Truth or Dare and can only be stopped if the last person who evoked it sacrifices their tongue into an urn and seals it with wax after an incantation is made in the church.

Later, following Olivia, Lucas, and Markie’s turns in the game, Brad is dared to withdraw his father's gun and make him beg for his life. However, in the act, Brad is shot and killed by an approaching officer. At the precinct, Olivia learns that Carter is Sam Meehan.

Olivia, Markie, and Lucas find Sam and force him at gunpoint back to the ruins of the church in Mexico. There, Sam begins the ritual and is about to sever his tongue when it becomes Lucas' turn to play the game. Lucas is dared to kill either Olivia or Markie, which he refuses. Possessed by the demon controlling the game, Lucas is forced to kill Carter / Sam before the latter can complete the ritual to end the game. He then proceeds to slit his throat and die.

Olivia forces the demon to reveal to her whether or not there was a definitive way to end the game with Markie and herself alive. The demon reveals that now that Sam is dead, there is not - but they can draw more people into the game and prolong their turn in it. Olivia hastily records and uploads a video to YouTube, warning of the game and its rules, before challenging the viewer of the video to Truth or Dare, initiating them, effectively involving millions of new Truth or Dare players therefore postponing her and Markie's involvement in the game for a very long time & saving their lives for the time being.

On Metacritic, Blumhouse's Truth or Dare is scored 37 out of 100 with 27 critic reviews. Overall, the film has "generally unfavorable reviews".

Retrieved from "https://movies.fandom.com/wiki/Blumhouse%27s_Truth_or_Dare?oldid=136469"
Community content is available under CC-BY-SA unless otherwise noted.