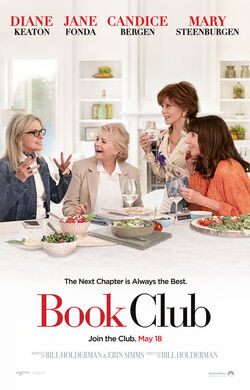 The film was released in the United States on May 18, 2018, by Paramount Pictures.

Four women have attended a monthly book club for 30 years, bonding over the suggested literature. Vivian, who owns and builds hotels, runs into Arthur, a man whose marriage proposal she turned down 40 years before. They begin a flirtation, but Vivian has always refused to settle down because she enjoys her independence. Diane is recently widowed, and her daughters would like her to move closer to them in Arizona because they perceive her to be in danger because she's living alone. Sharon is a federal judge who's been single since she divorced her son's father over 15 years ago. Carol has a successful marriage to Bruce, who has recently retired, but they have recently lacked intimacy.

One day they read Fifty Shades of Grey and are turned on by the content. Viewing it as a wakeup call, they decide to expand their lives and chase pleasures that have eluded them. While flying to visit her daughters in Arizona, Diane meets Mitchell and they strike up a relationship, though Diane is hesitant because of how recently her husband died and because she hasn't dated in decades. Vivian spends more time with Arthur, but her fear of commitment makes her keep him at a distance. Carol is frustrated with her husband's refusal to have sex with her, and by reading the book she realizes they are missing something. Sharon starts an online dating account to start dating again.

They continue to read Fifty Shades Darker and Fifty Shades Freed in their book club, while trying to figure out how to solve their problems. Diane's daughters continue to pressure her to move to Arizona but she doesn't want to leave her friends. She sneaks away to see Mitchell, and when her daughters can't reach her, they send the police out to find her. On discovering her at Mitchell's, they insist that she move into the basement of one of their homes, essentially ending her relationship with Mitchell. Eventually, Diane tells her daughters that though she is older, she doesn't need to be under surveillance. She packs up her belongings and leaves for Mitchell's, where they resume their relationship.

Arthur asks Vivian to commit to being in a relationship and she declines, despite Arthur's assurances that he wants her to continue being independent. Soon after Arthur leaves for the airport, Vivian realizes she's made a mistake and tries to go after him. She misses his airplane, but when she returns to her hotel, she finds Arthur waiting for her and they rekindle their relationship.

Carol, frustrated that Bruce is refusing to have sex with her, tries various ways to entice him, but he's completely oblivious. Eventually she spikes his beer with erectile dysfunction medication in his drink, but he becomes angry because that is not what's causing the problem, and they continue to not have sex. Bruce admits that he's been stressed because he retired, and doesn't know what to do with himself. They eventually reconcile after dancing together in a fund-raising talent show.

After a few dates with men she meets online, Sharon decides that it isn't for her. She gives a speech at her son's engagement party, where she realizes that everyone deserves to be in love and happy. She opens her online dating account again, in the hopes of finding someone.

Retrieved from "https://movies.fandom.com/wiki/Book_Club?oldid=179879"
Community content is available under CC-BY-SA unless otherwise noted.