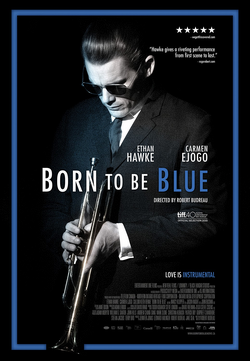 Born to Be Blue (2015) is a Canadian biographical drama directed by Robert Budreau. Starring Ethan Hawke and Carmen Ejogo, the film is loosely based on the life of American jazz musician Chet Baker. The film had a limited release on March 25, 2016.

The film is described as "semi-factual, semi-fictional".[1] Variety's reviewer, Andrew Barker, noted that the film is "about a character who happens to share a name and a significant number of biographical similarities with Chet Baker, taking the legendary West Coast jazz musician's life as though it were merely a chord chart from which to launch an improvised set of new melodies."[2] Set largely in 1966, Baker (portrayed by Ethan Hawke) is hired to play himself in a movie about his earlier years when he first tried heroin. He romances actress Jane Azuka (a fictional character, a composite of several of Baker's women in real life, portrayed here by Carmen Ejogo) but on their first date, Baker is attacked by thugs and his front teeth smashed. As Baker recovers from his injury, his embouchure is ruined and he is unable to play trumpet any better than a novice. Meanwhile, he must answer to a probation officer, and ensure he is employed, while sticking to his regime of methadone treatment.

Retrieved from "https://movies.fandom.com/wiki/Born_to_Be_Blue?oldid=162941"
Community content is available under CC-BY-SA unless otherwise noted.